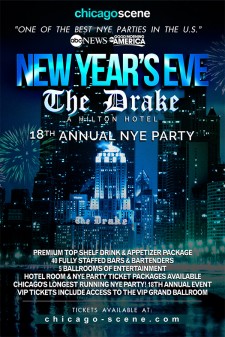 The Drake Hotel is Chicago’s Best New Year’s Party Venue & location in Chicago on the Magnificent Mile at the corner of Michigan Ave. and Oak Street overlooking the famous Lake Shore Drive and Lake Michigan.

Many celebrities & local sports stars have celebrated the new year at our party as well as the who’s who of Chicago.

Big Ten grads say, “It’s the number one New Year’s Party for Big Ten alumni in the city of Chicago,” we hear every year from many guests “that everyone from our college is here.” The main age range of our guests are from 21-35 and go up to people in their 40’s & 50’s.

Princess Diana stayed at The Drake Hotel on her only visit to Chicago.

NYE Tickets and information can be found at www.NewYearsPartyChicago.com

Tickets for the New Year’s Eve Party at the Drake Hotel are on sale Now! General admission tickets start at $135 and VIP tickets start at $155. The party begins 8 p.m. for VIP and 9 p.m. for GA ticket holders on Sunday, Dec. 31, 2017. General admission tickets include five ballrooms of entertainment, over 40 fully staffed bars, premium hors d’oeuvres, dessert and coffee buffet, and complimentary party favors, hats and noisemakers. Guests will also enjoy a midnight champagne toast and balloon drop in the Gold Coast Room and Grand Ballroom. The VIP ticket, in addition to everything previously mentioned, includes access to the VIP Grand Ballroom Bars open from 8 p.m. to 1:30 a.m.

This year we have more Reserved VIP Table options than ever before. The tables include Reserved Tables, Bottle Service in Gold Coast Ballroom, VIP Grand Ballroom, French Room, Drake Room, Drake Bros. Restaurant, Georgian, Venetian and Walton Rooms. Prices range from $195 to $395 per person. We have Party and Hotel Room Packages with both GA & VIP tickets available now.

Chicago Scene is known for its hugely popular events attended by thousands of Chicagoans, including the Chicago Scene Boat party and many other events, Chicago Scene invites Chicagoans and tourists alike to experience the hottest party of the year and ring in 2018 with style. 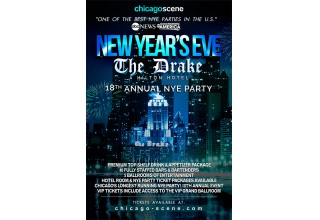 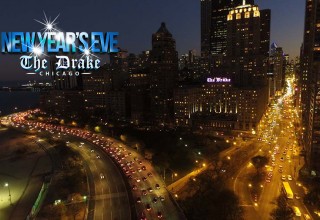 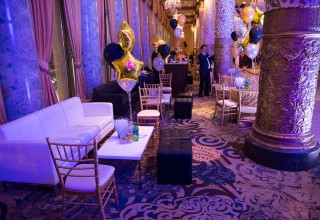 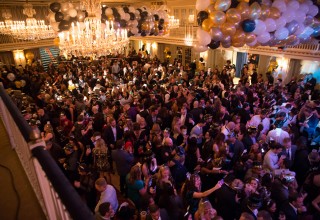