Post-Traumatic Stress Disorder (PTSD) is one of the greatest challenges facing America's 23 million surviving Veterans, their families, and the U.S. Veterans Administration (V.A.). PTSD is often caused by traumatic events occurring during active duty and afflicts about 25 percent of Veterans at any given time. A new cognitive-behavioral program has been developed for Veterans with PTSD. The first training for professionals who treat Veteran populations with PTSD is March 22-23, 2016. 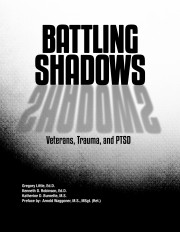 Germantown, TN, January 31, 2016 (Newswire.com) - ​​Post-Traumatic Stress Disorder (PTSD) is one of the greatest challenges facing America’s 23 million surviving Veterans, their families, and the U.S. Veterans Administration (V.A.). PTSD is often caused by traumatic events occurring during active duty and afflicts about 25 percent of Veterans at any given time. PTSD can lead to substance abuse, domestic violence, involvement in criminal justice, increased suicide risk, and a host of other problems. PTSD is characterized by heightened awareness, intrusive thoughts and feelings, nightmares, flashbacks, sleep disturbances, avoidance of certain situations, and mentally reliving the traumatic event. The V.A. estimates that about one-third of Veterans will experience PTSD during their lifetime.  It is a persistent problem that afflicts Veterans, their families and friends, their career, and nearly every other aspect of life. The V.A. has made trauma and PTSD treatment a high priority and a variety of new programs and treatment options have become available to Veterans. The V.A.’s National Center for PTSD provides a wealth of information on trauma and PTSD treatment for Veterans and their families.

While medication and several therapeutic methods are used effectively to treat trauma-related PTSD, many approaches require a substantial commitment and are time consuming. In addition, many Veterans are hesitant to take medication.  A promising new strategy has been developed from a Proven Evidence-Based cognitive-behavioral therapy and is a brief intervention lasting only eight group sessions. This program was developed by treatment professionals associated with Correctional Counseling, Inc. (CCI), a company based in Germantown, Tennessee whose specialties include training and programming in mental health. CCI’s programs are used extensively in 8 countries and they have been training treatment professionals in all 50 states since 1987.  CCI specializes in cognitive-behavioral programming, treatments that focus on changing thinking and behavior.

The new 8-session group program for Veterans is based on a systematic series of workbook-based exercises and discussions. The program, entitled “Battling Shadows: Veterans, Trauma, and PTSD,” stresses that attempts to fight traumatic memories is like fighting a shadow. Dr. Greg Little, first author of the book, related, “Battling Shadows teaches Veterans with trauma-induced PTSD to manage and deal with PTSD symptoms by learning present-focused coping strategies, meaning that past traumatic events are not explored very deeply. Rather, the focus is on the utilization of coping strategies when PTSD symptoms emerge. Over time, the use of these coping strategy techniques causes the symptoms of PTSD to subside.”

The program is group-based, so participants are surrounded by others experiencing similar issues.  Little added, “We don’t expect that all Veterans who enter the program will see their PTSD symptoms just disappear. Some will quickly find that they can learn to manage their issues, but some will obviously need a much deeper approach that takes more time.” In essence, the program will sort out those who can be assisted quickly while making it apparent who needs more intensive treatment.

CCI staff earlier developed successful programs for the emerging Veterans Court movement and realized that more treatment options for PTSD were needed. Battling Shadows is being employed in several sites already. CCI has arranged a special 2-day training for professionals working with Veteran populations. The initial “Battling Shadows” training will be held at the Great Hall in Germantown, TN on March 22-23, 2016.  For more information, contact CCI at (901) 360-1564 or visit moral-reconation-therapy.com.