New Psychological Thriller 'Til Death Do Us Part,' Starring Taye Diggs, to Hit Theaters in October

Written and directed by Christopher B. Stokes 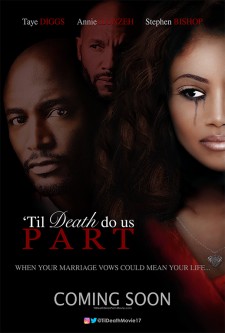 SANTA MONICA, Calif., May 11, 2017 (Newswire.com) - Actor/Producer Taye Diggs, the heartthrob in “How Stella Got Her Groove Back" and "The Best Man,” stars in the psychological thriller “Til Death Do Us Part.”

The film will feature Taye Diggs as Alex, the love interest of Annie Alonzeh. The "All Eyez on Me" actress will portray Madison Roland, the abused wife of Michael Roland, played by Stephen Bishop ("Safe House"), also starring Malik Yoba and Robbine Lee. "Til Death Do Us Part" is an affirming and suspenseful story about a young woman's struggle to escape a violent marriage to feel safe, whole, and find the ability to love again. The production started principal photography in April of this year and is scheduled for theatrical release in October 2017 in recognition of Domestic Violence Awareness Month (DVAM).

The October release of Til Death Do Us Part is in recognition and solidarity with Domestic Violence Awareness Month (DVAM). Says Stokes, "I can't think of a more thrilling and timely film project to draw attention to the movement. Madison Roland is the kind of character any director dreams of bringing to life."

Christopher B. Stokes, the director of “You Got Served," "Will to Love," "Only for One Night," "A Weekend with the Family" and "Boy Bye,” will helm the project as writer/director. Christopher Stokes was motivated to tell a story that depicts all facets of a relationship when the pendulum swings in an unforeseen direction. The perfect relationship, the perfect marriage, the pledge “Til Death Do Us Part” that spirals into violence when one partner becomes unhinged. For survivors of Domestic Violence, who have been wounded both physically and emotionally, the movie is meant to bring awareness of the courage it takes to be a survivor and to draw attention to an issue that has become a national epidemic. Stokes is an amazing director with a unique vision of the world — in particular, his talent and skill in creating psychological intensity that will bring the characters to life.

The October release is in recognition and solidarity with Domestic Violence Awareness Month (DVAM). Says Stokes, “I can't think of a more thrilling and timely film project to draw attention to the movement. Madison Roland is the kind of character any director dreams of bringing to life.”

Source: "Til Death Do Us Part" / BESPOKE Media Marketing

In Production, New Sci Fi Thriller Series 'I Am Chase' Acquired by Buffalo 8
Actress Prentiss Marquis makes her on-screen debut as the lead Chase Price in the new Sci-Fi series thriller "I Am Chase", acquired from Chase SPV, LLC by Buffalo 8 and now in production tackles the complexities of Black girl magic and coming of age.
BESPOKE Media Marketing - Dec 13, 2021