The UnderCover From SattoriSpas.com Now Available for Pre-Order

KELOWNA, British Columbia, October 27, 2017 (Newswire.com) - A new product is being made available for pre-order today, October 27th, at SattoriSpas.com.

The UnderCover is the solution to the heavy hot tub cover. Custom made to fit any spa cover, the UnderCover installs directly to the underside of the spa cover. The UnderCover is made of a heavy duty reinforced PVC film. At the center of each panel side is a drainage system, which collects accumulated water, and drains it back into the hot tub. The drainage system includes a funnel made of PVC film, feeding into a p-trap style drain which bars water vapor from moving up into the foam.

The p-trap concept, used in plumbing, is applied to a ½ inch bolt, with an acorn nut. Holes are drilled through to bolt head, and through the bolt’s length. Water moves through the bolt head, down through the length of the bolt, into the acorn nut. Threads in the bolt are sheared off on 2 sides, to allow the water to move up between the bolt and the acorn nut where it finally spill out the top of the nut, back into the hot tub tub. By moving the water this way, water vapor is barred from moving into the space between the UnderCover and the Spa Cover, while allowing any trapped water to drain.

Up until now, there hasn’t been a spa blanket worth noting that attaches directly to the spa cover, because such a system would cause mold without being able to drain. As soon as a hole is made for a drain, the spa blanket becomes redundant, since water vapor would be able to move freely into the spa cover.

With this new application of a widely used backflow prevention principle, the spa owner is able to enjoy a lighter spa cover without extra effort.

The PVC film used is made of a high strength synthetic woven fabric, with a thick coating of chemical resistant PVC applied to each side. Although it’s remarkably strong, it’s worth noting the full UnderCover system weighs under 4 pounds on average.

The UnderCover fastens directly to the underside of the spa cover with “button zip fasteners,” which tie the PVC film to the skirting of the hot tub cover.

Installed to an old waterlogged heavy spa cover, the end user can expect a drying, lightening effect. Since only a dry heat now touches the Styrofoam cover, the spa cover quickly dries out, making the spa easier to access. 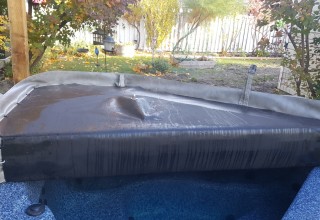 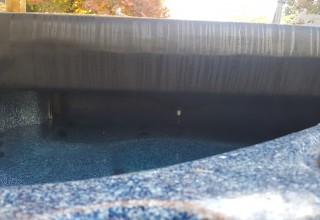 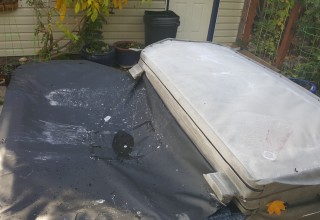 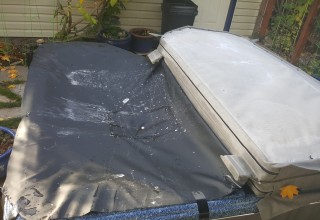