"Muerte O Gloria: The Rise of the American Soccer Fan" will premiere on July 24, 2015 during Major League Soccer All Star Week in Denver, Colorado. The film will premiere on "Movie Night," presented by MLS and the "Kicking and Screening Film Festival" in Denver's famed Skyline Park. http://www.mlssoccer.com/all-star/2015/skyline-park/friday-july-24-mls-all-star-week-skyline-park-events 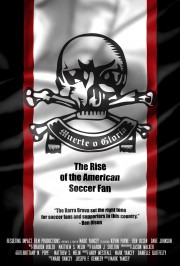 Acclaimed film Director Mark Yancey draws audiences into the perspective of soccer fan supporters and the role they have played in the success of the team and, indeed, the entire league.

"The Barra Brava set the right tone for soccer fans and supporters in this country."

Resulting Impact Film Productions is the production company behind the documentary. "Muerte O Gloria" is the first feature film to be produced through this innovative new company.

The trailer and more information on the film is available at:

"Muerte O Gloria: The Rise of the American Soccer Fan"

Resulting Impact Film Productions is a film production company based in San Diego, California focused on creating compelling meaningful stories that have an impact on society.