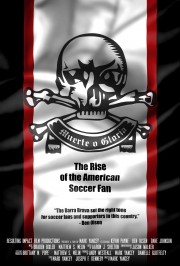 Acclaimed film Director Mark Yancey draws audiences into the perspective of soccer fan supporters and the role they have played in the success of the team and, indeed, the entire league.

"The Barra Brava set the right tone for soccer fans in this country."

These pioneering members share remarkable stories about the team and their fellow supporters, and exemplify the character of the most influential fan supporters group in U.S. Soccer history.

Resulting Impact Film Productions is the production company behind the documentary. “Muerte O Gloria” is the first feature film to be produced through this innovative new company.

The film will premiere in Europe at the Offside FilmFest March 10, 2016.

The trailer and more information on the film are available at:

"Muerte O Gloria: The Rise of the American Soccer Fan"

Resulting Impact Film Productions is a film production company based in San Diego, California focused on creating compelling meaningful stories that have an impact on society.