New Book About a Teen With Williams Syndrome Asks: If You Could Cure Your Special Needs Child, Would You? 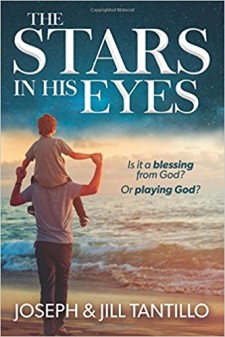 Belleville, IL, May 2, 2017 (Newswire.com) - Joey Tantillo was diagnosed with Williams Syndrome when he was just nine months old. During the very first year of Joey’s life, he had to endure a life-threatening heart procedure. His father slept under his crib the night before the surgery and made a deal with God: Save his baby son’s life and he would be fine with whatever was to come. God answered his prayer. Today, Joey is an active 13-year-old living with Williams Syndrome, and his parents are the authors of a new book, loosely based on their lives, called The Stars in His Eyes.

Williams Syndrome is a rare genetic disorder caused by a spontaneous deletion of genes on chromosome #7. Symptoms include cardiovascular issues, developmental delays, learning challenges, and a distinctive facial appearance (including a “starburst” eye pattern).

"By creating a Joey T Fan club (A site dedicated to my son and his fans) — and writing this book — I have made my special needs son's life much happier. He loves to read the posts from fans and reviews of his book."

“My wife Jill and I decided to publish this book in honor of our son, Joey, our family, and the many other families of children with Williams Syndrome around the world who are striving to live a normal life despite this diagnosis,” says Joseph Tantillo, Sr.

In the fictional story, Joseph and his wife are faced with a choice to sign up for a questionable trial treatment program that promises to cure the symptoms of Williams Syndrome and turn their son into a “normal” teenager. News of the experimental treatment stirs a storm of drama for all of the families who are asked to participate. They are forced to ask themselves: Is it OK to “play God?”

The Tantillos’ new novel is helping to bring new attention to Williams Syndrome, which affects 1 in 10,000 American children and adults. Children who have WS are often very social, happy, and talented. At the same time, they have health and developmental challenges that are likely to follow them throughout life.

The Tantillo family is looking forward to participating in the annual Williams Syndrome Walk at Eckerts Farms in Belleville, IL, on May 20, 2017, at 9 a.m. Joey and his parents will be signing copies of their new book, The Stars in His Eyes, at the event, which will benefit the Williams Syndrome Association.

Joseph Tantillo is the CEO and founder of GreekGear.com, the web’s premier provider of licensed sorority and fraternity merchandise. His wife and co-author, Jill, is a member of the leadership team at Eckerts Farms. Please contact jtantillo@inarush.com if you’d like to request an interview or to learn more about Williams Syndrome.

Source: "The Stars In His Eyes" Authors Joseph & Jill Tantillo