Neutrino Energy: The Solution to Pollution the World Desperately Needs 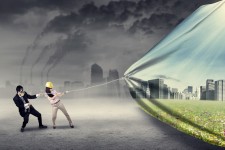 BERLIN, August 9, 2019 (Newswire.com) - Amid the international hype surrounding the climate change threat, pollution doesn't get the attention that it deserves. The truth is, however, that air pollution and other types of environmental degradation continue to claim millions of lives around the world.

A recent study estimates that 30,000 Americans lost their lives due to air pollution in 2015, and there's no reason to assume that this trend has slowed down in the last few years. As existing renewable energy technologies continue to disappoint, neutrinovoltaic technology is emerging as an unexpected solution.

China Is the Worst Offender

China's industrial economy developed gradually throughout the latter half of the 20th century. After this communist country was accessed to the World Trade Organization (WTO) in 2000, however, the Chinese economy exploded. China is now home to one of the world's largest manufacturing economies, but unlike other developed countries, this Asian nation does not adhere to commonly-accepted regulatory standards.

From treating workers like slaves to taking slow efforts to curb toxic pollution, the Chinese industrial machine is decoupled from the safety and human rights standards that much of the rest of the world abides by. This laissez-faire attitude makes China attractive to international corporations, but a recent piece in Scientific American points out that China's pollution affects the rest of the world.

Air pollution in the United States and Europe is far worse than it would be if state-run Chinese manufacturers followed common-sense emissions policies. As things stand, however, the toxic smog emitted by unregulated fossil fuel consumption in China is taking the lives of hardworking American citizens half the world away.

As more lives become threatened by fossil fuel emissions every year, an energy revolution is brewing that will entirely eliminate the threat posed by this type of toxic air pollution. For decades, scientists have observed neutrinos with bemusement; it's possible to observe and measure these particles, but trillions of them stream through us and everything we see every day, and it's practically impossible to stop this endless flow.

According to E=mc2, every particle that has mass also has energy. In the wake of the 2015 discovery that neutrinos have mass, scientists around the world started scratching their heads and wondering if harnessing neutrinos for their energy was within the realm of possibility. In 2017, the neutrino scientists at the University of Chicago shocked the world that it was, in fact, possible to capture energy from the movement of passing neutrinos. Now that neutrino-derived energy had been empirically demonstrated as viable, it would only be a matter of time until aspiring engineers determined a way to capture the power of neutrinos as they move through the universe.

How Neutrino Energy Will Make Pollution a Thing of the Past

There's currently no solution to the looming pollution crisis. Without bringing China to heel, this reckless nation will continue to pollute the world with its unchecked pursuit of maximum profits. The real source of the pollution problem facing the modern world, however, isn't the policy of a single nation. Rather, it's the resource scarcity that drives the modern economy and makes the shortest, dirtiest path to profit the most desirable.

If China, America, the EU, and other major world powers had access to adequate quantities of clean, renewable energy, there would be no incentive to burn fossil fuels. At present, mainstream renewable energy sources, such as wind and solar, are crippled by their limited applications: Windmills only work when the wind is blowing, and solar panels only work in direct sunlight. Neutrino energy devices, however, work the same no matter where they are or what the time of day might be. Since neutrinos pass through dirt and solid rock, neutrino energy devices even work deep underground, which eliminates the landscape destruction issues inherent to the proliferation of windmills and solar cells.

Industrialization Without Pollution with the Neutrino Energy Group

With freely-available neutrino energy, every nation would be free to pursue the unlimited heights of industrialization without causing concerns regarding global pollution. Moving away from fossil fuels would also disincentivize the use of petroleum-based plastics, which are also derived from our limited fossil fuel reserves. As a result, the world's other mounting pollution crisis, ever-growing islands of plastic trash in the seas, would also be solved.

Increased industrialization has always been the saving grace of humanity. The modern industrial age has almost doubled the average lifespan, and diseases that once ravaged humanity have been eliminated with modern sanitation. There's no reason to turn away from the wonders of industrialization just because we aren't currently doing it right; instead, we simply need to look to the future and design technologies that will solve our current dilemmas.

While neutrinovoltaic technology is still in its infancy, remember that it took decades for solar panels to make their way into consumer use. Over the next few years, neutrino energy will break into the mainstream, and it will deliver the solution to pollution the world so desperately needs.