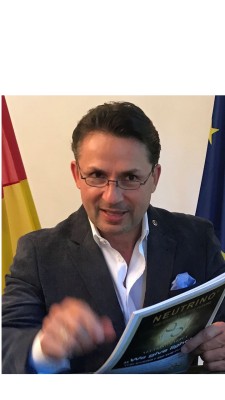 Berlin, Germany, August 15, 2017 (Newswire.com) - There is little doubt that the title above leaves room for scientific and philosophical interpretation, and that is where the controversy begins. Depending upon one's initial approach and underlying assumptions, the topic at hand can be discussed in radically different ways, even though the same terms and concepts are being used. Some prefer to orient themselves exclusively in accordance with the dictates of proven knowledge, while others find this approach insufficient in light of potential innovations and future developments. Both positions are valid.

How free can energy be? And is this merely a question of the cost?

According to Einstein, energy and mass are directly proportional to one another (E=mc²), which logically implies that mass and energy are always found together. In fact, it is energy that keeps the processes of the physical world in motion. Energy is nature's driving force. Energy pervades the entire universe.

Although energy itself is intangible, it is nevertheless possible for us to feel energy and to perceive it with our senses, and we can observe the effect that it has on everything around us. Sometimes we can even watch energy pass from one form into another, as is, for example, the case when friction creates warmth.

How exactly is energy acquired? Where can it be found? In 1841 Julius Robert von Mayer began publishing the results of his research on the nature of heat, which indicated that energy cannot be spent or destroyed, but instead continues to exist, merely taking on a new form. This groundbreaking observation secured von Mayer a place as one of the principal founders of the law of conservation of energy (first law of thermodynamics). According to this fundamental law of physics, existing energy can neither perish, nor can new energy come into being. Thus, the overall level of energy found within a closed system will always remain constant, although the energy itself can be converted from one form (i.e. kinetic energy, chemical energy, electrical energy, thermal energy, etc.) into another.

So much is clear.

Science also teaches us that the universe is made up of countless particles and constituent elements. Some of them are already known to us; others have yet to be discovered. Energy belongs to this cosmic inventory, and the levels of it found in the universe are so immensely high that they are almost incomprehensible to the average person. A portion of this energy can, of course, be felt as warmth in the form of solar radiation or seen with the naked eye as light, but we are completely unable to perceive the vast majority of the energy that permeates existence. However, one of the powerful, yet under normal conditions totally unperceivable cosmic forces that make up our universe is slowly gaining more and more attention and is now even on the way to becoming a household word: neutrinos. These mysterious particles have something almost ghostly about them, and for this very reason they were long referred to as "ghost particles," yet neutrinos are quite real. They come to us from the sun as well as out of the endless deeps of space, continuously bombarding our planet in unthinkable numbers. For years they have inspired mankind's imagination with the promise of unlocking the secrets of the universe — as well as with the possibility of utilizing their potential.

Presently, billions of dollars are being spent on research into this elusive natural phenomenon, and scientists from around the globe are trying desperately to find out all they can about the neutrino. No one with any insight into this subject could seriously believe that these elaborate experiments and enormous expenditures are motivated by pure curiosity alone. It is obvious that there's much more to it than that.

In the end, it certainly appears that the so-called "ghost particles" of yesteryear aren't nearly as ghostly as once thought. The discovery that led to two scientists winning the Nobel Prize in physics in 2015 has made it clear to even the most casual of observers that neutrinos possess mass, and everyone who has had high school-level physics knows that anything which has a quantifiable mass also possesses a measurable level of energy. This fact alone can sufficiently explain the present interest in these particles: The researchers studying neutrinos are looking for energy — neutrino energy; in other words, massive quantities of "free energy."

Because these infinitesimally small particles act in accordance with the known laws of physics, most importantly the law of conservation of energy, they also adhere to the principles of quantum mechanics. This means that neutrinos are a potential power source by virtue of the fact that their mass implies a corresponding presence of energy. It should be noted, however, that this doesn't necessarily imply that the energy in question is "free," unless of course, one considers all existing energy to be free of charge until it loses this status through the process of being converted into electricity and provided to the consumer at a cost.

The Karlsruhe Institute of Technology (KIT) recently invested 60 million euros in an extremely sensitive scale, and a team of physicists working there is now using it to determine the exact mass of a neutrino. As soon as this has been accomplished, it will finally be possible to precisely calculate and quantify the energy levels of neutrino radiation in much the same way that it is possible to measure the energy of sunlight. At the present moment, however, the power of the neutrino still remains a mystery.

Obviously, science still has much to learn, but we already know that one of the ways neutrinos come into being is through the nuclear fusion of the sun and other stars. Because of this, no other particle except the photon occurs more often in the entire universe. Physicists today believe that neutrinos are unrestricted by electromagnetic and other cosmic forces, but only time will tell, whether or not this is actually the case. It wasn't long ago that physicists believed neutrinos to be without mass, and this has also been proven to be false.

It was in 2015 that two scientists utterly changed the way we think about the neutrino. Professor Takaaki Kajita from the University of Tokyo and the Canadian physicist Professor Arthur McDonald were awarded the Nobel Prize for providing findings that brought the scientific community into an uproar. Working independently of one another, Kajita and McDonald developed a method of measurement which demonstrates that neutrinos do indeed possess mass. If one interprets this now established fact of physics correctly and reads between the lines, then one has an answer to the question of how to obtain the "free energy," about which all of mankind has long dreamed — everyone, that is, except the proponents of the energy industry that reaps huge profits from the world's total dependence on environmentally destructive fossil fuels.

Now that it is known that an endless stream of invisible cosmic particles is continuously showering the earth with massive amounts of energy, the next logical step is to make use of this knowledge by developing technology that is capable of putting these forces to work for the good of humanity. Just as wind requires a windmill and sunlight a photovoltaic system, neutrinos are in need of corresponding technological devices that can harness and transform their energy. First, when it has been converted into electricity will this "free energy" also be useful energy.

Would one call it "free energy," if one were to have an oil or gas well in one's own garden? Is the energy "free" when it comes from solar panels on the roof or a community windmill? Or is the true source of genuinely "free energy" perhaps the universe around us?

In this context, the concept "free energy" basically entails that the energy in question is free of charge and virtually unlimited in its availability. The desire for an inexpensive, inexhaustible source of energy is understandable, and an alternative to fossil fuels or even to renewable resources would be a huge step forward. On the other hand, the use of this concept could be a source of contention, since it also possesses a specific meaning in the field of physics: In terms of the second law of thermodynamics "free energy" refers to a quantity of first-law energy which is available to perform thermodynamic "work," i.e. to be transferred to its surroundings. Thus, "free energy" (or Helmholtz free energy) signifies a specific quantity of energy at a specific point in time within a closed system and is restricted by the limitations of the law of conservation of energy. Subject to entropy and the principles of thermodynamics, it cannot be said to be unlimited.

For this reason, it is important to clarify that when speaking about the unlimited nature of neutrino energy as "free energy," no claim is being made that said energy could be in a position to violate or transcend the laws of physics. The limitless potential of neutrino energy rests upon the fact that the system is open, being fed by the cosmic radiation of the universe. This means that any and all comparisons of this approach to utopic and scientifically impossible flights of fancy such as the perpetuum mobile can only arise through ignorance or malign intention.

The boundless energy that constantly reaches our planet from the infinite depths of space — not merely the energy of the sun, but also other forms of cosmic radiation — will one day offer mankind a host of previously unimaginable possibilities for gaining usable energy, and this will be achieved by following the laws of physics.

The Neutrino Energy Group (in Germany "Neutrino Deutschland GmbH" with headquarters in Berlin) is presently working together with universities and researchers from around the globe to devise practical applications for the effective utilization of neutrino energy. The development of prototypes and products for daily use (neutrino cells, neutrino power cubes, transportable neutrino power stations) will follow in the near future. Of course, the energy produced cannot be described as completely free of charge, since research and development come at a cost and the devices themselves will have to be purchased.

Today, power plants reliant upon oil, coal and natural gas are already being shut down. This may be due to the fact that society is no longer willing to accept the massive amounts of pollution, which they create, nor the alarming acceleration of global warming, to which this pollution contributes. Or perhaps it is simply that these "technological dinosaurs" are dying a natural death due to the disappearance of their "food sources," i.e. the fossil fuel reserves that they require in order to produce energy. For whatever reason, it is safe to say that their time is almost over.

When compared to energy derived from fossil fuels, energy produced using cosmic radiation has one major advantage: Because its source is the universe, this energy is for all practical purposes inexhaustible and will be available for billions of years.

The challenge facing today's society and the coming generations is to find ways to tap this energy of the future and secure a smooth transition away from the current and hopelessly outdated methods of energy production.

The time has come to move on and embrace the possibilities of the future using science and the forces of the universe. It is time to develop methods of converting the unlimited cosmic energy around us into electricity. This energy is by no means free of charge, but it is significantly "freer" than the energy we rely on today.