WASHINGTON, DC, May 25, 2018 (Newswire.com) - The original pistols used in the infamous 1804 duel between Alexander Hamilton and Aaron Burr are on display at the Smithsonian’s National Postal Museum through June 24. They are featured in the exhibition “Alexander Hamilton: Soldier, Secretary, Icon,” along with mail, portraits, and postage and revenue stamps reflective of Hamilton’s life and career as the first U.S. treasury secretary.

The rare public showing represents the first time the pistols have been on public display in the Washington area.

Visitors of all ages will be drawn in to the man behind the musical that is sweeping the nation.

The full exhibition remains on view through next March. Its opening coincides with the June opening of the hit Broadway play, Hamilton: An American Musical, at the Kennedy Center in Washington, D.C.

The original dueling pistols used by Hamilton, former secretary of the treasury and retired two-star general, and Vice President Aaron Burr in the duel that resulted in Hamilton’s death are on loan to the museum from JPMorgan Chase & Co.

In a scene that is scarcely imaginable today, on July 11, 1804, Burr killed Hamilton in a duel. Burr had lost the U.S. presidential election of 1800 and the New York governor’s race of 1804. He blamed Hamilton’s outspoken opposition for both losses—especially a letter attributed to Hamilton and published in the Albany Register that referred to Burr as “despicable.” Burr then issued the challenge to a duel, which was set for a location outside New York City in nearby New Jersey.

In the 215 years since his untimely death at 49 in the duel with Burr, Hamilton has become an American icon. Stamps, money, movies, television miniseries, and now a hit Broadway musical, commemorate his meteoric rise and his sweeping vision for America’s future.

“In a Federalist-style gallery within the museum’s William H. Gross Stamp Gallery, visitors will see objects highlighting Hamilton’s extraordinary influence on our country,” said Elliot Gruber, director of the museum. “Visitors of all ages will be drawn in to the man behind the musical that is sweeping the nation.”

The exhibition features free franked covers signed by Hamilton from 1789 to 1794. As secretary of the treasury, he was permitted to send official correspondence for free by signing his name. This ensured that customs inspectors and collectors all over the country were kept busy responding to ceaseless requests for information about imports and exports, tonnage and construction of ships, trade routes and ports of call. His ability to interpret and remember this data made Hamilton the best-informed member of President George Washington’s first Cabinet.

The earliest postage stamps honoring Hamilton are on display, highlighting a marble bust of him at age 49, made by the Italian sculptor Giuseppe Ceracchi in 1794, as well as the original steel die for the 30-cent stamp. Multiple copies were made from the original bust. The exhibition showcases the one that belonged to Levi Woodbury, one of Hamilton’s successors as secretary of the treasury. It passed to Woodbury’s son-in-law, Montgomery Blair, who was postmaster general from 1861 to 1864. The bust is on loan from the Smithsonian’s National Portrait Gallery. The Ceracchi bust of Hamilton appeared on the 30 cent stamp from 1870 until 1890. Hamilton’s portrait did not appear on postage again until 1956.

“History remembers Alexander Hamilton as the pioneering first secretary of the treasury, but he was also responsible for the Post Office Department,” said Daniel Piazza, chief curator of philately. “He used the mail to collect import and export data from customs officers all over the country, and his ability to interpret this data made Hamilton the best informed member of Washington’s first Cabinet.”

A special website augments the exhibition, providing additional access to the rich content presented. The museum is hosting a series of educational programs and events in support of the exhibition.​ 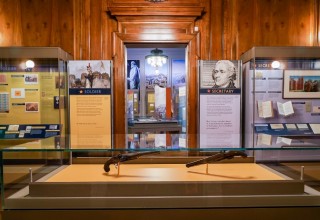 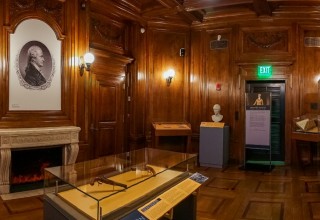 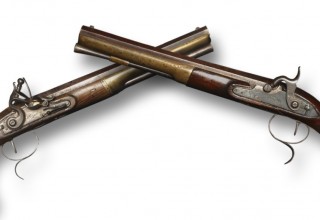 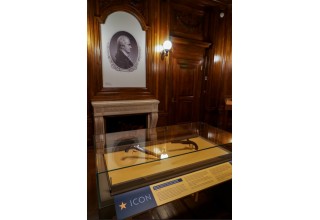 The National Postal Museum is devoted to presenting the colorful and engaging history of the nation's mail service and showcasing one of the largest and most comprehensive collections of stamps and philatelic material in the world.