My Fellow Soldiers: Letters From World War I Opens at National Postal Museum 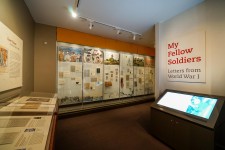 “My Fellow Soldiers: Letters from World War I,” opened today, April 6, at the Smithsonian’s National Postal Museum. The exhibition, commemorating the centennial of the First World War, explores America’s role in the war through the unique lens of personal correspondence written by Americans at the front and their loved ones at home. It is open through Nov. 29, 2018.

Created by the National Postal Museum in collaboration with the Center for American War Letters at Chapman University in Orange, Calif., “My Fellow Soldiers: Letters from World War I” features objects from the museum’s collection and material on loan from several institutions and private collections, including original correspondence from the Center for American War Letters. Several artifacts will be on public view for the very first time.

Letters humanize the enormity of war and the sacrifices it demands of military personnel, their family members and communities. As the primary method of communication 100 years ago, letters sustained profound personal connections throughout the international conflict. Four million Americans served during this unprecedented conflict that brought the United States onto the world stage; raised complex questions about gender, race and ethnic relations; ushered in the modern era; and continues to shape the world.

“This incomparable selection of wartime correspondence illuminates the thoughts and emotions of the authors as they grapple with the effects of World War I,” said Lynn Heidelbaugh, the exhibition’s curator. “The experience of sending and receiving letters resonates with us on an emotional level, and reading these firsthand accounts helps make the history relatable today.”

Included in the exhibition are letters by Gen. John Pershing, the commander of the American Expeditionary Forces and someone who understood the power of the medium. In his famously public letter at the end of the war, he thanked every member of the American Expeditionary Forces for their bravery and service. That letter begins, “My fellow soldiers,” and expressed his appreciation of the service members under his command. He wrote, “As an individual, your part in the world war has been an important one in the sum total of our achievements.”

The exhibition encourages visitors to explore the firsthand accounts of love, longing and loss and to reflect on the power of communication. A special website augments the exhibition as well, providing additional access to the rich content presented.

This exhibition is made possible, in part, through the support of the Veterans of Foreign Wars.

About the Smithsonian’s National Postal Museum

The National Postal Museum is devoted to presenting the colorful and engaging history of the nation’s mail service and showcasing one of the largest and most comprehensive collections of stamps and philatelic material in the world. It is located at 2 Massachusetts Ave. N.E., Washington, D.C., across from Union Station. The museum is open daily from 10 a.m. to 5:30 p.m. (closed Dec. 25). For more information about the Smithsonian, call (202) 633-1000 or visit the museum website at www.postalmuseum.si.edu.

The National Postal Museum is devoted to presenting the colorful and engaging history of the nation's mail service and showcasing one of the largest and most comprehensive collections of stamps and philatelic material in the world.