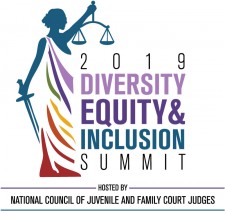 RENO, Nev., October 21, 2019 (Newswire.com) - The National Council of Juvenile and Family Court Judges (NCJFCJ) has released a video establishing the importance of diversity, equity and inclusion in the judiciary.

The video features several judges and judicial officers from across the country discussing what diversity, equity and inclusion means to them and how professionals in the juvenile and family courts can better represent the children and families they serve.

The NCJFCJ hosted the first-of-its-kind convening of organizations representing judges and practitioners within the judiciary and legal profession at the first Diversity, Equity and Inclusion (DEI) Summit, supported by the Jessie Ball duPont Fund and facilitated by The Raben Group, during the NCJFCJ Annual Conference this year.

The group collectively determined where the largest gaps and opportunities to diversify the profession are. Goals, tactics, action items and roles and responsibilities were discussed and determined.

In 2015, the NCJFCJ developed its diversity statement, which states the organization’s commitment to diversity in every aspect of its composition and in performing its mission. Diversity in the judiciary is vital to upholding public trust and confidence in the legal system. Diversity in this context refers to communities and individuals who are identified by race, ethnicity, national origin, gender, gender identity or expression, sexual orientation, socioeconomic status, religion, age, or disability status. To achieve its mission and promote diversity, the NCJFCJ asserts its commitment to diversity through the following principles:

“The inaugural DEI Summit was a unique opportunity for collaboration among leading organizations within our profession,” said Judge Hiram Puig-Lugo, NCJFCJ member and a leader of the inaugural DEI Summit. “We need to address the lack of diversity as a collective team and improve DEI across the board. Our group of national leaders will convene quarterly to ensure our plan is moving forward. It is exciting to see this momentum and we look forward to the hard work ahead.”

Since 1937, the NCJFCJ has served as the leader in providing continuing education opportunities, research, technical assistance, and policy development in the field of juvenile and family law. The NCJFCJ is a nonprofit organization with nearly 2,000 members nationwide and internationally. The NCJFCJ’s mission is to provide judges, courts, and related agencies involved with juvenile, family, and domestic violence cases with the knowledge and skills to improve the lives of the families and children who seek justice.

Recently, the NCJFCJ was awarded the 2018 Readers’ Choice Best in Business Award for Most Diverse – Workforce Diversity by Northern Nevada Business View.