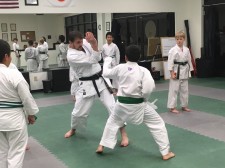 When they opened their first school in 2009, they had recently put most of their belongings in storage and set up shop in Chattanooga, Tennessee, bringing with them only the necessities.

''It was a long shot that we put everything into,'' Ryan said of starting the school Elements Martial Arts after years of running one of the largest schools in the nation for another owner. ''It was like an artist's life – living on nearly nothing, fueling with training and research, teaching a small, dedicated group of students.''

After learning that they were expecting a child, the couple ended up closing their original dojo, opting for stability in Nashville in time for their daughter's arrival.

''We made incredible memories and connections that year, and the devoted training time grew us exponentially,'' Ryan said.

In 2011, they purchased their first set of Greatmats' 1.5-inch thick Grappling MMA Mats.

''We chose Greatmats because of the great quality for the cost,'' he said. ''They were easy to set up and tear down, and we loved the green/grey color combination.''

After the purchase, Ryan and Chelsie, who have a collective 50 years of experience in martial arts, were impressed by the balance of the mats.

''They're firm and supportive for executing quick techniques,'' Ryan said. ''They don't absorb much energy or cause the foot to root too deeply.''

In early 2016, the couple returned to dojo ownership when they purchased the established New Visions Dojo in Nashville, which celebrates its 10th year of business in 2019. Known for thorough, well-rounded traditional training, continued education for teachers and black belts, international dan grade certification, and teaching proper movement principles, New Visions Dojo is the only dojo in Nashville training a NKF/WKF sport karate team - or olympic karate team. New Visions Dojo students enjoy technical training, partner work and kumite, according to Ryan. They also get a modern look into their physical bodies, mentality, and grow in the qualities of a karateka.

''They know that they'll be earning their rank and growing in real, usable skills at their own paces,'' Ryan said, noting that he and Chelsie rank in all three Wado organizations between them. ''Several dojo have been great about collaboration and continued education, so we work with them to expose our students to different approaches and commonalities. I really appreciate that, as we're all here to learn.''

After seven years of training on their Greatmats Grappling MMA Mats, they recently purchased more of the same mats for New Visions Dojo.

''So far, it’s been another excellent choice,'' Ryan said. ''They feel great! We also have zero complaints about them being too stiff for throws and landings.''