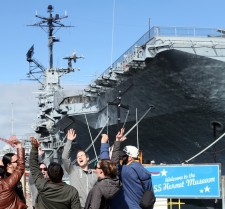 San Francisco, CA, April 27, 2016 (Newswire.com) - ​​In advance of Memorial Day (May 30th), Museum Hack is expanding beyond brick and mortar museums to add the USS Hornet to its arsenal. This tour is ideal for company team building and other private groups and features the fun, interactive and unconventional tours that Museum Hack is known for. The USS Hornet is one of the most decorated and historically relevant aircraft carriers the U.S. Navy has available. Originally  commissioned in 1943 and last decommissioned in 1970; the Hornet was instrumental in US victories in the Pacific Theater during WWII and recovered Neil Armstrong, Buzz Aldrin and other astronauts from Apollo 11, the first humans to walk on the moon. The USS Hornet is located just across the bay in Alameda, a short bus or ferry ride away from San Francisco. This unique tour is available to both private and corporate groups, Monday – Sunday, 10am – 5pm.

“Few people realize that the USS Hornet has a history that dates back to George Washington and the Continental Navy. It’s a very special museum because of its ability to transport you to a fascinating world behind this floating island; our tour hacks the mind-blowing secrets behind her walls and the science behind her accomplishments.” – Kathryn Nickles | USS Hornet Tour Guide

Museum Hack’s USS Hornet tours reveal the untold life of a sailor, from cozy bunks and mess halls turned operating rooms to the narrow corridors and battle stations. They show you what it takes to make a floating fortress operate. Along the way you will create your own flight squadron mascot, develop your own PFM maker, enact your Line Crossing Ceremony and compete for the best jobs on the ship.

While the USS Hornet is best known for her decorated service history, it’s also considered to be one of the most haunted places on earth. Her steel hull has been the focus of several television shows including MTV’s Fear, Scariest Places On Earth and Syfy’s Ghost Hunters. On the tour, guests explore different decks and Museum Hack tour guides provide detailed accounts of supernatural phenomena. Guests can take a photo of these areas, and at the end of the tour create a short ghost story that explains their photo; the best photo and story wins a cool prize from the Hornet.

We offer public tours at four major museums in the US, including the Metropolitan Museum of Art in NYC, the American Museum of Natural History in NYC, the National Gallery of Art in DC, and the de Young Fine Arts Museums of San Francisco in SF.

BarkTrivia Night - Not Your Typical Walk in the Park
BarkBox & Museum Hack collaborate to present BarkTrivia, an interactive event for both humans and dogs
Museum Hack - Jun 9, 2016
Newswire