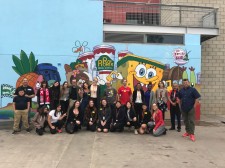 LOS ANGELES, December 18, 2018 (Newswire.com) - Nonprofit Muralism.org took to the streets of Los Angeles once again, this time to celebrate the life of Stephen Hillenburg, the creator of Nickelodeon's animated television series "SpongeBob SquarePants" who lost his battle with ALS on Nov. 26.

A mural in Hillenburg’s honor now proudly resides at Roy Romer Middle School in North Hollywood between Sears and at the Valley Plaza Shopping center, a labor of love by Muralism artists with special needs, the 2018 interns at Nickelodeon and the students at Roy Romer Middle School. The students at the middle school worked side by side with the Muralism artists and Nickelodeon interns to complete the 60-by-20-foot mural showing SpongeBob and the whole cast running around a track mirroring the school’s own field. The mural was completed on Dec. 14 after almost two weeks in the making. “It is so exciting to have this beautiful mural featuring the SpongeBob gang teaching us about health and wellness,” said Dr. Luis Rodriguez, principal at Roy Romer Middle School.

Muralism is a nonprofit organization that is committed to beautifying the city of Los Angeles and surrounding areas while providing a safe place for artists with special needs to connect with the community. Each mural is designed by a local muralist. A coloring-book-style drawing is prepared by a team of artists with unique abilities, including those with autism, Down syndrome and ADHD. After the mural is prepared, the community is invited to fill in the painting in a paint-by-number style. The Muralism team comes back in the end to clean up the mural for a professional finish.

Ernie Merlán, founder of Muralism and former executive director at Exceptional Minds, a visual effects and animation school for young adults on the autism spectrum, commented, "Muralism’s goal is to paint 100 murals in Los Angeles before the 2028 Olympics in Los Angeles." During the last Olympics in Los Angeles, the city was known as the mural capital of the world. Due to an 11-year moratorium, murals in the City of Angeles fell in disrepair. The Muralism team first came together in 2014 when the North Hollywood neighborhood councils and Paul Krekorian, Councilman District 2, commissioned a huge mural alongside the 170 freeway on Whitsett and Sherman Way. Two hundred volunteers from the community helped paint the mural, including students from Exceptional Minds, four of North Hollywood's neighborhood councils and the Boy Scouts. Councilman Krekorian cut the ribbon on this historical mural as the first mural in the San Fernando Valley after the repeal of the moratorium.