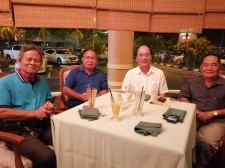 MIRI, Malaysia, May 23, 2019 (Newswire.com) - Community leaders from the Mulu area in Sarawak have questioned the anti-palm oil tour being led by the Swiss NGO, Bruno Manser Funds. The community leaders, including Pastor Lian Malang whose congregation is made up of villagers from the Mulu area, Philip Ube and Ayub Ngang who represent the Tering and Berawan tribes development committees, met with the Resident of Miri, Mastapha Julaihi to voice their grievances over the continued bad press for development in the area.

Pastor Lian Malang had filed a police report against the NGO earlier in March and stated to local media that:

"I lodged the report against the NGOs because they are allegedly stirring up trouble by instigating the protests against the plantation company. These NGOs do not represent the natives of Mulu. We community leaders represent the Mulu folk who want to see socio-economic development in Mulu that can benefit the people."

The Bruno Manser Fund has paid the expenses for a few villagers from the Mulu area to travel around Europe to present an anti palm oil message that allege the Mulu National Park, a UNESCO heritage site, was being destroyed.

The Sarawak Assistant Minister of Urban Development and Natural Resources, Datuk Len Taliff Salleh responded to the allegations in a press statement on Feb. 22, 2019, and said that the area licensed to the plantation, Radiant Lagoon, was not a threat to Mulu National Park.

The Assistant Minister issued a follow-up statement on May 2, 2019, to declare that the areas approved for oil palm company, Radiant Lagoon Sdn Bhd did not encroach onto land gazetted for the Mulu National Park.

Despite those assurances, the Bruno Manser Fund published a video on YouTube on May 7, 2019, declaring that the "Mulu National Park is heading towards an ecological disaster."

Other community members have also questioned the information being distributed by the Bruno Manser Fund. In a press conference on March 22, 2019, Penghulu ( Village Chief ) Herbert Lawai stated:

"We are representatives of the villages, taking our own initiative to explain to all parties to clear our name as the residents of the area.

We, the original inhabitants of the Mulu and Long Terawan areas, have been embarrassed by the protest actions of Ukau Lupung's brother, which are beyond the customs of the villagers and the people on the ground.

We ourselves gave advice to Ukau Lupung and Willie Kajan, and explained the effort and social responsibility of the company after the plantation is open such as giving oil palm seedling, cooperating with the company, taking employees from among villagers and so on."

In frustration with the continued bad press from the Bruno Manser Fund campaign, the community leaders met for the third time with the Resident of Miri on May 16, 2019 and requested for action to be taken against the campaign. Pastor Lian Malang said at the meeting with the Resident, that the campaign was bringing shame to Malaysia in the eyes of the world.

Together with Philip Ube and Ayub Ngang, Pastor Lian had a meeting with the Deputy Speaker of the state and Mulu Assemblyman, Datuk Gerawat Gala on May 20, 2019 where the bad press being created by the Bruno Manser Funds campaign was discussed. Following that meeting, Datuk Gerawat reiterated that there was no unlawful development in Mulu and that the Bruno Manser Fund did not represent the majority of the villagers.