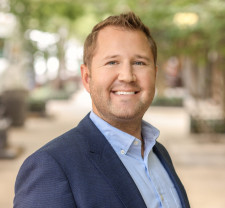 NEW YORK, February 3, 2022 (Newswire.com) - Brian Robinson's campaign committee, Common Sense Policies NYC for Brian Robinson, announced his Congressional endorsement by Victoria Weil, President of Tribeca's Bogardus Plaza, for the Congressional seat currently held by Jerry Nadler in NY's 10th District. "As a community organizer for almost 15 years, I've interacted with all sorts of people: elected officials, business owners, the community board and hundreds of residents," said Weil. "Brian is unique in that he expressed interest in helping out with our local pedestrian plaza and then jumped right in with no additional prodding. He has shooed away illegal skateboarders, wound the clock and now wants to help with the plaza maintenance. Brian is enthusiastic, earnest, and, if he believes in something, he pursues it relentlessly without being overbearing. I am thrilled that he's volunteering for the Friends of Bogardus Plaza and look forward to getting him on the Board of Directors. I am therefore happy to announce that Brian has my full endorsement for his candidacy, and I look forward to what he will continue to do for our community."

Weil has been with the non-profit organization Friends of Bogardus Plaza since 2006, formerly acting as its organizer, event planner, and fundraiser. She was initiated as the president in 2010, when she had played an instrumental part in the transformation of the plaza. "I am excited and honored to receive the support of such an integral member of our community," said Robinson. "Bogardus Plaza is a landmark of the district, one that highlights our history. I look forward to being a part of its preservation and creating an open safe space for the community."

Brian Robinson is a proud Jewish American father, husband, and man of his community. His passion for building a greater quality of life for the people around him led to founding his own consumer advocacy company. Started in his apartment over a decade ago, the company rapidly expanded to champion debtor rights for both small businesses and individuals alike.

Brian showed his prowess as leader and mediator at an early age. He became a mentor in his high school's Peer-to-Peer program, where he helped incoming freshmen adapt to their new environment. This sparked a passion for community service, and he started to also mentor students entering special education classes. He went on to volunteer at an inner-city Orleans Parish middle school, where he tutored vulnerable youths in the basic sciences.

Brian's love for his community led him to then explore an interest in politics at Tulane University. He combined this newfound interest with his love for theory and dialogue and graduated with a Bachelor's in Political Philosophy. He authored the book Adderall Blues, based on his own experiences with ADD, to emphasize the importance of mental health and a system that supports intelligences of all types. The book became a finalist for the 2017 American Book Fest Best Book Award. Brian has been a guest lecturer on the topic since, recently presenting at the Manhattan Adult ADD Support Group, where his presentation broke the record number of attendees.

Still true to his community roots, Brian continues to volunteer for Bogardus Plaza. His platform focus is public safety, helping small businesses, and respectful rhetoric. He spends the rest of his time in Lower Manhattan, where he lives with his loving wife Lindsey and their beautiful 4-year-old daughter. Visit https://www.votebriannyc.com. Follow on Facebook, Instagram, and LinkedIn.