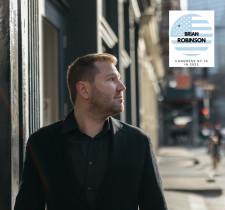 NEW YORK, March 2, 2022 (Newswire.com) - The celebration was held at Hale Salon, located on Franklin St., as part of the platform's recognition of small businesses. Brian was joined by his closest family and friends. The event was initiated with a reception, where guests were served refreshments from a local catering business, Lemons and Olives. Following the reception, Brian gave a prepared speech on his platform's most significant issues and showcased the campaign ad for the very first time. Several public figures also attended, including radio and YouTube show host Heshy Tischler, and president of Bogardus Plaza, Victoria Weil. Also in attendance were Yiatin Chu, President of the Asian Wave Alliance, and family friend Doug Garr, Mario Cuomo's former speechwriter, reports Mr. Robinson's campaign committee, Common Sense Policies NYC for Brian Robinson.

Brian Robinson is a proud Jewish American father, husband, and man of his community. His passion for building a greater quality of life for the people around him led to founding his own consumer advocacy company. Started in his apartment over a decade ago, the company rapidly expanded to champion debtor rights for both small businesses and individuals alike. Brian has advocated for consumers against aggressive creditors and insurmountable debt. He alleviated the pressure of harassing lenders by providing protection against FDCPA violations. Likewise, he also recruited and built an in-house debt arbitration team backed by a network of debtor rights attorneys - all so that his clients could provide a better financial future for themselves and their loved ones. Brian showed his prowess as a leader and mediator at an early age. He became a mentor in his high school's Peer-to-Peer program, where he helped incoming freshmen adapt to their new environment. This sparked a passion for community service, and he started to also mentor students entering special education classes. He went on to volunteer at an inner-city Orleans Parish middle school where he tutored vulnerable youths in the basic sciences.

Brian's love for his community led him to then explore an interest in politics at Tulane University. He combined this newfound interest with his love for theory and dialogue and graduated with a Bachelor's in Political Philosophy. He authored the book Adderall Blues, based on his own experiences with ADD, to emphasize the importance of mental health and a system that supports intelligences of all types. The book became a finalist for the 2017 American Book Fest Best Book Award. Brian has been a guest lecturer on the topic since, recently presenting at the Manhattan Adult ADD Support Group, where his presentation broke the record number of attendees. Still true to his community roots, Brian continues to volunteer for Bogardus Plaza. He spends the rest of his time in Lower Manhattan, where he lives with his loving wife Lindsey and their beautiful four-year-old daughter.