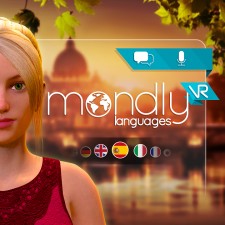 The new VR application is the first to realize virtual reality’s promise of rich, immersive and automated educational experiences.  The app offers instant feedback on pronunciation, suggestions that enrich learner’s vocabulary and surprises that transform learning a language into a fun experience.

Fluency in a language is not how many words you know, but how well you communicate with the words you do. Our goal with Mondly is to push the envelope of language learning with new technologies that drive our users to become better communicators and have richer life experiences. And the Oculus team and the virtual reality technology they've created offered us the perfect environment for achieving this goal.

Bridging the Technologies Behind Chatbots and Speech Recognition with VR

Mondly’s conversational voice chatbot for language learning was first released by the company in August 2016. The technology uses advanced speech recognition that understands millions of phrases and words in 28 different languages. Since its release, it has been used by millions of Mondly users and has learned millions of new phrases and responses, thanks to the chatbot’s self-learning technology.

To bridge the technologies behind its chatbot, speech recognition, and VR, the company had to develop a new automatic voice detection system.  Alexandru Iliescu, the CEO and co-founder of ATi Studios, spoke about the challenges involved with creating Mondly VR:

“The toughest challenge was to make the speech interaction feel natural in VR.

Because VR is so immersive, we quickly realised that traditional speech interaction models that require a tap or a voice command to enable speech recognition would kill the flow of the experience.

So we developed our own automatic voice detection system. It calibrates to the room’s background noise, and it ignores unintentional sounds. The result is amazing, the conversations with the virtual characters happen as naturally as real-life conversations – they just flow.”

Learn Languages VR by Mondly allows users to practice conversing in a new language with virtual characters; all within realistic situations that teach language fundamentals and help build their confidence.

The first version offers three scenes and 28 languages to explore:

·       The Restaurant - Practice ordering food and drinks in a small bistro.

·       The Eurotrain - Have a conversation and make new friends on a train in Europe.

Having learned from the usage patterns of over 15 million Mondly users to date, ATi Studios has created the VR application based on what users actually need to effectively learn a new language – instant feedback and an immersive, real-world experience to build their confidence.

“Fluency in a language is not how many words you know, but how well you communicate with the words you do” said Iliescu. “Our goal with Mondly is to push the envelope of language learning with new technologies that drive our users to become better communicators and have richer life experiences. And the Oculus team and the virtual reality technology they’ve created offered us the perfect environment for achieving this goal.”

To download the general Mondly mobile application for free, which includes the conversational voice chatbot, visit:

​Or visit Mondly on the web

Mondly Languages is a leading language learning platform with more than 15,000,000 downloads worldwide. Available on iPhone, iPad, Android and PC, it’s the first to launch a VR experience for learning languages featuring speech recognition and chatbot technology. The mobile apps have a 4.7 star rating in the App Store and Google Play from more than 400,000 customer ratings.

The app was recognized by the Apple editorial team in Europe (UK, France, Germany and other countries) and selected “Best New App” in January 2016. Mondly was also included in the 2016 “Language Learning” and “Visiting France” collections in the App Store.

ATi Studios is the maker of Mondly, a fast-growing, popular language learning platform with over 15 million downloads.