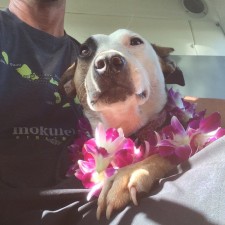 Honolulu, Hawaii, June 10, 2017 (Newswire.com) - Mokulele Airlines continues their annual tradition and proudly announced today that they will once again be offering beautiful handcrafted leis to the first 500 passengers who island hop on Sunday, June 11th in honor of King Kamehameha Day.  Mokulele’s pilots will be distributing leis to all passengers traveling on the holiday.  Mokulele is proud of its Hawaiian heritage by recognizing its roots in the rich traditions of the islands. Mokulele was started by a native Hawaiian, Rebecca “Kawehi" Inaba in 1994. It was her goal to share the natural beauty of the islands with her passengers.  Mokulele continues to build on that reputation. On days like this, Mokulele appreciates the traditions that have made them a reliable and affordable resource to the tourists who enjoy Hawaii and to the locals alike.

Mokulele is currently operating over 120 daily flights with its team now accounting for more than 250 employees in Hawaii, all located across four islands. Mokulele Airlines averaged a 97 percent on-time performance over the past year. Routes currently include– Honolulu airport on O`ahu, Kapalua, Kahului, and Hana on Maui, and Kona and Waimea on the Big Island, and Ho`olehua airport in Moloka`i.

"King Kamehameha united the islands. The holiday honors his legacy which continues to inspire us to make it convenient and affordable for kama'aina and visitors alike to visit the neighbor islands," said Mokulele President, Rob McKinney

“King Kamehameha united the islands. The holiday honors his legacy which continues to inspire us to make it convenient and affordable for kama`aina and visitors alike to visit the neighbor islands,” said Mokulele President, Rob McKinney

Mokulele Airlines is a locally - family owned and operated business and strongly believes in treating its passengers like Ohana.

Mokulele is a family-owned and operated airline that has quadrupled its number of flights since 2011 and company Owner / CEO Ron Hansen is focused on the brands continued upward growth. Mokulele is based in Kona, Hawaii, and employs nearly 250 people. Mokulele operates 16 late-model Cessna Grand Caravans and provides over 120 daily flights between seven airports on Oahu, Maui, Molokai, and Hawaii. In addition Mokulele provides Mainland service between Imperial / El Centro, Santa Maria, and Los Angeles. Mokulele’s newest addition to its offerings is their service from Los Angeles to Santa Maria on California’s central coast.

AFFORDABLE ADVENTURE AWAITS - To book your next Mokulele Hop in Hawaii or California visit http://www.mokuleleairlines.com

Mokulele Airlines operates over 120 daily flights from 9 airports in Hawaii and 2 airports in California.