The Rules For Wealth Creation WITHOUT a College Degree Have Changed; Dan Lok Leads the Global Economic Movement for Financial Literacy 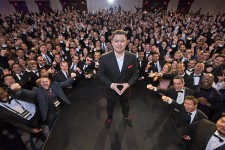 VANCOUVER, British Columbia, April 17, 2019 (Newswire.com) - Dan Lok wins the Eventex People’s Choice Event for Closers in Black. This year’s 331-plus submissions came from 42 countries with Closers in Black taking the highly coveted second-place win. The award recognizes individuals and companies that showcase the best practices, original ideas and top innovations in their respected industries on an international scale. The People’s Choice category is the only Eventex category voted for by members of the public. The win proves out what social media numbers already demonstrate: the public loves Lok.

Dan Lok Education Inc.’s Closers in Black Event (CIB) competed amongst some of the most recognizable brands and cities in the world, such as Adobe, BMW and the city of Liverpool, England, to win this prestigious accolade. The Eventex Award is regarded as the live event industry’s highest accolade - setting the bar for events globally. CIB happens again in September of 2019 in Vancouver and remains "by invitation only." For more details, watch the event trailer here.

Over 1,000 of Lok’s graduates from the High Ticket Closer (HTC) Certification Program from 120 countries attend this three-day career training event. HTC is Lok’s popular seven-week online financial literacy course in which he educates students on an abundance mindset and closing high-ticket sales.

“The way people learn is changing rapidly. Closers in Black feels like an Oscar ceremony, an adrenaline-fueled sales conference and a traditional ‘cap n gown’ ceremony all rolled into one black-tie experience. A college degree is now optional when it comes to being massively successful and this event celebrates this fact. I don’t want people to just learn from me. I want people to take action and CIB inspires action,” says the social media maverick.

Dan is available for commentary on the future of Closers in Black. www.danlok.com.

About Dan Lok
Dan Lok is a Chinese-Canadian business magnate and global educator best known for being the founder and chairman of Closers.com - the world’s No. 1 SaaS platform which connects companies to closers. Mr. Lok has led several global movements to redefine modern education, working with men and women from 120-plus countries to develop high-income skills, unlock true financial confidence and master their financial destinies. Beyond his success in business, Mr. Lok was also a two-time TEDx opening speaker; is an international best-selling author of over a dozen books; a member of Young Presidents Organization (YPO) - a private group of global chief executives whose companies employ 16 million people and generate six trillion USD in annual revenues; and host of The Dan Lok Show – a series featuring billionaire tycoons and millionaire entrepreneurs. Today, Mr. Lok continues to be featured in thousands of media channels and publications every year and is widely seen as one of the top business leaders by millions around the world.

Selling Power Magazine Recognizes Tyson Group as a Top 25 Sales Training Company (2021)
With a nation struggling to go back to "business as usual," sales training proves to be more important than ever.
TGC Worldwide - May 19, 2021