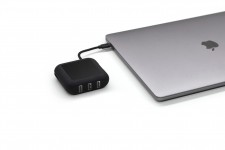 Mountain View, CA, April 8, 2017 (Newswire.com) - ​​With rapid advances in the electronics industry, laptops and smartphones are constantly adapting to the changing technological landscape. These new developments come with a need for accessories that simplify new advancements. Homey addresses rising concerns about devices requiring USB-C chargers, such as the new MacBook, with the launch of their April 2017 Indiegogo campaign for PowerUp

​The release of the vastly updated MacBook Pro in October 2016 created a new market for all-in-one power adapters. Home electronics company Homey has taken advantage of this gap in the industry by announcing its new revolutionary product, the PowerUp, on Indiegogo. Following the emergence of USB-C charging ports, the PowerUp addresses many MacBook Pro users’ concerns surrounding the new laptop’s lack of traditional USB ports and low battery life.

​The PowerUp solves the MacBook Pro’s cross platform capability issues by integrating the USB Type-C power adapter with a Type-A USB hub. Along with its portable size, convenience, high speed charging, and data transfer abilities, the PowerUp also allows the user to charge up to three devices all in one place and in just half the time. Furthermore, the PowerUp’s USB ports allow for data transfer at 5GB/second between a user’s MacBook Pro and their other devices.

Homey founder Peikai Hou said, “I made this product with my own personal needs in mind while using Apple and Mac products. I trust that other users will have had the same frustrations and issues as I did and have the same need for PowerUp as I do.”

With its Type-A USB ports and elimination of the need to carry around various chargers, dongles, and other USC-C converters, the PowerUp is a single all-encompassing replacement for the MacBook Pro charger. With its sleek and compact design available in both white and black, the PowerUp will match the Macbook Pro perfectly. Experts show that the October 2016 MacBook pro sales have surpassed those of previous models, which will contribute to a high generation in demand for the PowerUp. By changing the way we look at the functionality of the newest MacBook Pro, Homey is taking a lead in the home electronics industry. Users of the latest MacBook Pro are especially anticipating its release.

A number of different reward tiers will be offered on the PowerUp's Indiegogo crowdfunding campaign, with one of them offering a new PowerUp at a fraction of the price. Development is moving at a rapid pace, and the Indiegogo page is set to launch right on schedule. Soon, you can get the device that does it all for only $69, the exact same price as a standard MacBook charger. For more information on release of the ultimate MacBook Pro companion, be sure to visit homeylab.com.