His father, Daniel Finegood was the artist and activist who originally altered the Hollywood sign in 1976. 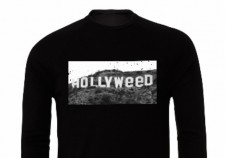 Hollywood, CA, February 8, 2017 (Newswire.com) - ​​​​​​Those in Los Angeles woke up to an amusing, eye-popping change to their skyline on New Year's Day.  The Hollywood sign was altered with black and white sheets to read 'HOLLYWeeD' -- in honor of the California's pot legalization and movement towards legalization on the Federal level.  The first time it happened was in 1976, when an art student named Danny Finegood went up to the sign with a few friends and altered its appearance to read 'HOLLYWeeD".

As it turns out, Finegood used the feat as a project submission for an art course at Cal State Northridge and he received an "A" for the daring project.  He and his friends altered the sign three other times.  That same year on Easter Sunday, he was responsible for changing the sign to read "HOLYWOOD".  In 1987, Finegood changed it to read "OLLYWOOD" in light of Oliver North and the Iran-Contra Affair.  Then in 1992, he altered the sign to read "OIL WAR" during the Persian Gulf War.

Fans can customize the Hollywood sign to say whatever they wish. From 'MATTWOOD' to 'I LOVE DONUTS', the famous hillside monument is yours on a T-shirt.

Finegood, who snapped a photo of his work that morning, owned the copyright to the original iconic image. Daniel's son Matthew has since started a crowd funding campaign on Indiegogo to kick-start the distribution of merchandise featuring the original vintage photo of the alteration.

The line of t-shirts, much like the latest alteration on New Year's Day, is a homage to the late Danny Finegood's original creative work on the iconic sign.  Donors who contribute $25 will be sent a poster of the original 'HOLLYWeeD' sign, and any $50 contributors will receive the new 'HOLLYWeeD' T-shirt.

Finegood has laid out several key objectives for his kickstarter fund-- to build and inventory of shirts printed with the photo his father took of the 'HOLLYWeeD' sign on New Year's Day 41 years ago.  Next would be to build an online storefront in which fans and connoisseurs from around the world can "make a statement" on the persisting movement towards marijuana decriminalization.

The vision for the eCommerce site consists of a T-shirt customization tool.

"Fans can customize the Hollywood sign to say whatever they wish.  From 'MATTWOOD' to 'I LOVE DONUTS', the famous hillside monument is yours on a T-shirt," said Finegood. "I hope to give everyone an opportunity to make their own statement."

Finegood plans on donating a percentage of the proceeds to a charity of a buyers choice, or to the ACLU or The Institute of Multiple Myeloma -- a group that researches cures for the disease that the elder Finegood passed away from in 2007.