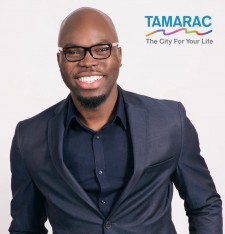 TAMARAC, Fla., December 19, 2019 (Newswire.com) - Marlon D. Bolton, elected as the City’s District 1 Commissioner in 2016, has been selected to serve a one-year term as Tamarac’s Vice Mayor.

“I’m honored that my peers on the Commission selected me to fulfill this role and to be the City’s first black vice mayor and the youngest to ever fill this position,” said Vice Mayor Bolton. “My goal is to use the knowledge I’ve garnered as an elected official and in my professional life to work with my colleagues to bring my mission: "one Tamarac, one vision, forward in unity’ to reality.”

Vice Mayor Bolton serves on a number of boards, including the Broward County Community Action Agency and Fort Lauderdale Executive Airport’s Aviation Advisory Board. He is also active with the National Black Caucus of Local and Elected Officials and the National and Florida League of Cities.

In addition to his public service, Bolton is the Lead Pastor at the Praise Experience Church of North Lauderdale and a County Court Mediator, certified by the Florida Supreme Court. Vice Mayor Bolton holds degrees in Communications and Public Safety Management and he is pursuing a master’s degree in criminal justice at Florida International University.

ABOUT THE CITY OF TAMARAC

Tamarac covers a 12-square mile area in western Broward County and is home to more than 65,000 residents and approximately 2,000 businesses. Ideally situated, Tamarac provides easy access to highways, railways, airports and waterways, and a wealth of cultural and sports activities. Tamarac’s median age continues to grow younger and the population more diverse, as people recognize the City as a great place to spend their lives. For more information, visit www.Tamarac.org.