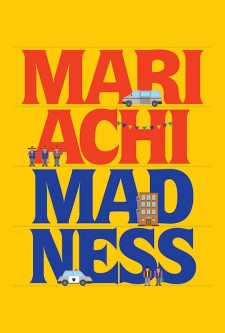 Mariachi Madness is the second short film produced by Rorbi LLC and was developed in collaboration with Nadie Zoe. “Nadia is one of the most talented emerging directors coming out of Columbia University’s MFA program,” said Michael Karp, Executive Producer for Rorbi LLC.

Alex (Ramon Torres) finds his girlfriend’s cat, Hugo, unresponsive and turns to Javier, his father, for help. With years of wisdom behind him Javier (Eliud Kauffman) tells his son to just tell her the truth. Rose (Andrea Morales) unexpectedly arrives early to up Hugo and after a confusing interaction gathers that something is wrong.  Mistakenly thinking that Hugo has gone missing she tells Alex to find him. Meanwhile, Javier calls upon his former mariachi group (Mariachi Grupo Mixteco) in an attempt rectify the situation. When they arrive at Rose’s New York City apartment Carlos (Mark Torres), the band leader, breaks a window in a failed attempt to get Rose’s attention. Eventually the group garner’s not only her attention, but that of the neighborhood and the NYPD. Things don’t end well for Alex and Hugo, both of whom get tackled by one of the officers. The police part ways leaving Alex to face a distraught Rose. Javier consoles his bereft son with some midnight tacos. The film is directed by Nadia Zoe. The screenplay is by Ramon Torres and Nadia Zoe. The producers are Michael Karp, Nick Rudd and Christin Cato.