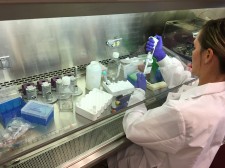 PHILADELPHIA, July 16, 2018 (Newswire.com) - Longevity Biotech, Inc. (LBT) is launching a new clinical study to identify specific immune and inflammatory markers that could potentially be used to both diagnose Parkinson’s disease (PD) and stratify patients by stage of disease. The clinical study will be initially launched at the Corporal Michael J. Crescenz Veterans Affairs Medical Center (CMCVAMC) Parkinson’s Disease Research Education and Clinical Center (PADRECC) and supported by The Michael J. Fox Foundation for Parkinson’s Research. In addition, preliminary ex-vivo therapeutic evaluations of drug candidate LBT-3627 will also be conducted during the course of this study.

“There is a growing body of clinical evidence that the immune system plays a key role in neurodegenerative diseases, including Parkinson’s disease. This study aims to leverage machine learning techniques to identify immune-based inflammatory biomarkers that could provide clinically relevant diagnostic information. The identification of these markers would have a tremendous impact on the pace of disease modifying therapeutic development for Parkinson’s disease patients by providing a new metric to track disease progression while possibly identifying new disease targets as well,” said Dr. Scott Shandler, Ph.D., co-founder and CEO of Longevity Biotech.

We are excited to collaborate with innovative companies such as Longevity Biotech and leading organizations such as The Michael J. Fox Foundation to bring the latest research and development activities to our nation's veterans.

Inflammation is an important strategic area for The Michael J. Fox Foundation as the organization continues to work toward identifying new disease-modifying paradigms. “A lack of objective biomarkers to diagnose and track Parkinson’s disease is a major roadblock to optimizing patient care and accelerating therapeutic development. Investigating inflammation is a promising area of research that may point to these vital tools as well as nominate novel therapeutic targets,” said Anna Naito, Ph.D., Senior Associate Director for The Michael J. Fox Foundation, which also has supported pre-clinical development of LBT-3627.

Recent clinical work by Dr. Howard Gendelman, M.D., the Margaret R. Larson Professor of Internal Medicine and Infectious Diseases, Chairman of the Department of Pharmacology and Experimental Neuroscience, and Director of the Center for Neurodegenerative Disorders at the University of Nebraska Medical Center, and Scientific Advisor to Longevity Biotech, and others have provided early clinical evidence highlighting the role played by the immune system in neurodegeneration. This two-year study aims to expand on previous enticing work and correlate standard clinical scores from the Unified Parkinson’s Disease Rating Scale (UPDRS) with both new and existing blood-based markers, such as alpha-synuclein.

“We are excited to collaborate with innovative companies such as Longevity Biotech and leading organizations such as The Michael J. Fox Foundation to bring the latest research and development activities to our nation’s veterans,” said Dr. James Morley, M.D., Ph.D., Associate Director for Research at the CMCVAMC Parkinson's Disease Research, Education and Clinical Center and Assistant Professor of Neurology at the University of Pennsylvania Perelman School of Medicine. Dr. Morley is the leading the clinical portion of the study.

This study complements ongoing neurodegenerative therapeutic development efforts by Longevity Biotech to rebalance the immune system by targeting the VPAC2 receptor with LBT-3627, a drug candidate based on the Hybridtide® (synthetic peptide) platform technology. “The goal is to convert T cells, which are key actors in the adaptive immune system, from an inflamed, neurodegenerative state to a more healthy, neuroprotective one. LBT-3627 has demonstrated robust neuroprotective results in animal models of Parkinson’s disease to date and we will continue testing the effects of LBT-3627 on human immune cells as part of this study,” said Dr. Jenell Smith, Ph.D. a Lead Scientist at Longevity Biotech.

Parkinson’s disease is a progressive neurodegenerative disorder resulting in motor impairment and non-motor symptoms. Parkinson’s disease is the second most common neurodegenerative disease after Alzheimer’s disease. While a range of medications and surgical interventions are available to treat some of the symptoms of Parkinson's disease, no therapy has been shown to either prevent or cure the disease.

Longevity Biotech, Inc. (LBT) is a biopharmaceutical company pursuing numerous innovative programs based on the patented Hybridtide® platform technology. LBT’s candidates display unique attributes that are expected to provide either first-in-class or best-in-class product profiles in their respective indication. The Hybridtide® technology can be applied to most peptides and is available for partnership and/or co-development efforts as appropriate. For more information, visit http://www.longevitybiotech.com.

ABOUT THE MICHAEL J. FOX FOUNDATION

As the world’s largest nonprofit funder of Parkinson’s research, The Michael J. Fox Foundation is dedicated to accelerating a cure for Parkinson’s disease and improved therapies for those living with the condition today. The Foundation pursues its goals through an aggressively funded, highly targeted research program coupled with active global engagement of scientists, Parkinson’s patients, business leaders, clinical trial participants, donors and volunteers. In addition to funding more than $800 million in research to date, the Foundation has fundamentally altered the trajectory of progress toward a cure. Operating at the hub of worldwide Parkinson’s research, the Foundation forges groundbreaking collaborations with industry leaders, academic scientists and government research funders; increases the flow of participants into Parkinson’s disease clinical trials with its online tool, Fox Trial Finder; promotes Parkinson’s awareness through high-profile advocacy, events and outreach; and coordinates the grassroots involvement of thousands of Team Fox members around the world.

ABOUT THE Parkinson’s Disease Research Education and Clinical Center (PADRECC)

The Philadelphia Parkinson’s Disease Research, Education and Clinical Center (PADRECC) is one of six centers of excellence specializing in the diagnosis and management of Parkinson’s disease and related movement disorders. We offer clinical, research, and educational services for Veterans living in the CMCVAMC PADRECC service area as well as interested clinicians. Our mission is to deliver state-of-the-art care and conduct cutting-edge research to assure the highest quality of life for veterans afflicted with Parkinson’s disease and related movement disorders. The care provided encompasses the professional practice of neurology, psychiatry, neuropsychology, nursing, pharmacy, and social work.