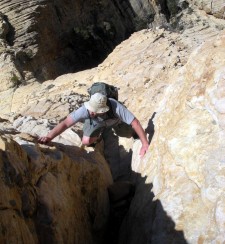 Pulaski County, Arkansas, April 10, 2017 (Newswire.com) - Clayton Robert Hogan had spent his whole life climbing mountains and hiking. He was in his top form and he was on a regular hike when he fell and broke his wrist. What he thought was just a bit of bad luck ended up into something much more serious. At the hospital where he had his wrist treated, they informed him that he had osteoporosis. Nevertheless, rather than seeing this as the end of his life as he knew it, he took it as a new challenge. He is now proud to announce that, just one year after his diagnosis, he has been able to climb Mount Washington.

He says: "I couldn't believe it when I was diagnosed. How could I suffer from osteoporosis, when I have been so healthy all my life? I was told I would have to take it easy from now on, but I didn't take that advice. My theory was that I would only get weaker if I didn't keep going, and my latest climb has proven that."

"I was told I would have to take it easy from now on, but I didn't take that advice. My theory was that I would only get weaker if I didn't keep going, and my latest climb has proven that."

Osteoporosis is a debilitating condition whereby the bones become weaker and fragile, so that those who have it have much higher risk of having a fracture. It is a slow-developing condition and most people, like Clayton Robert Hogan , are only diagnosed when they break a bone. In fact, wrist fractures are some of the most common fractures that people with osteoporosis experience, followed by hip fractures. Perhaps most worrisome of all is the fact that vertebral fractures are also common, which is why the official advice is for people with the condition is to be more careful in their activities.

Clayton Robert Hogan adds: "When I started to get all the information leaflets and booklets about osteoporosis, I thought I was made of glass. Apparently, people with the condition frequently break their pelvis or arm. A sneeze can make the spinal bones collapse or a rib to break! I felt like Samuel J. Jackson in Unbreakable all of the sudden..."

The condition remains hidden for so long because it isn't actually painful. However, once fractures start to occur, and particularly spinal fractures, people tend to start experiencing chronic pain. Spinal fractures are a common cause of long-term (chronic) pain. Because the condition is slow-developing, it is generally diagnosed in older people. Clayton Robert Hogan is quite unique, therefore, since he is still very young. However, he decided that rather than taking things easy, he would continue with the activity he loves most - mountain climbing - while taking the necessary precautions. And his first challenge was Mount Washington.

Mount Washington is not the tallest mountain to climb as it reaches only 6,288 feet. However, what makes it so challenging is the New Hampshire weather, which seems to congregate specifically on the peak of the mountain. In fact, a 231 mph blast of wind was once recorded on Mount Washington's summit, which is the highest ever recorded on the surface of earth.

"A gust of wind at Mount Washington is enough to literally blow you over," says Clayton. "And if I get blown over, my bones could literally shatter. I knew I wanted to challenge myself, but I wasn't sure whether I wanted to be challenged in terms of distance and height, or in terms of conditions. I opted for conditions, since I've already been to the top of high mountains. And what a challenge it was!"

Mount Washington is very close to the coast, which is why it has such unpredictable and changeable weather. The winter period is the worst in terms of weather fluctuations, when temperatures plummet. A temperature of -40 degrees Fahrenheit is quite common, but it often feels like -100 degrees F due to the wind chill factor. While Hogan likes a challenge, he opted to make the climb just after the worst of the winter weather was over.

The top of the mountain can be reached in one of two ways, both during summer and winter. The first is the technical alpine route and the second is the strenuous hike. Hogan opted for the latter. "I picked a time when the temperature wouldn't be too low and went for the hike method. However, I still had to face hurricane force level winds, so it was a fantastic adventure!"

Hogan's medical team advised him strongly against making the hike, but he took "caution to the wind" and did it anyway. He is so proud of his achievement of actually having made it, against the odds. He ends: "I know that a fall could break my bones. But all that means to me is that I shouldn't fall, not that I should stop."