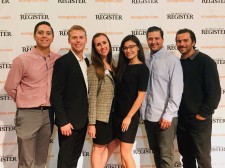 IRVINE, Calif., September 20, 2019 (Newswire.com) - On Wednesday, the 26th Annual Best of Orange County awards were celebrated at the Anaheim National Grove, honoring businesses, organizations and cities that were voted the “best” by Orange County Register readers. For the third year in a row, local solar installation firm Sullivan Solar Power was recognized as a finalist for the Best Solar Contractor category. This first-place win comes less than three months after winning the Greater Irvine Chamber of Commerce’s Business of the Year award.

Orange County has seen explosive growth in the solar sector, with over 56,000 residential and commercial projects installed to date. With ample sun and the right incentives in place, homeowners have been able to capitalize on the savings from producing their own energy, while contributing to a sustainable future.

“We are honored to have been voted the best solar contractor by Orange County Register readers for a third year in a row” stated founder and president of Sullivan Solar Power, Daniel Sullivan. “Our commitment to the community starts with education and community partnerships and is followed through by quality assurance and quality control, creating solar advocates who help us fundamentally change the way we generate electricity.”

Sullivan Solar Power has been in business since 2004, at a time when there were only two dozen solar companies in San Diego, where the company was founded. Daniel Sullivan, a journeyman electrician who founded his company with only $2,500 in the bank, knew that his electrical trade held the solution to the global energy crisis. With a vision to end conflict over oil and achieve energy independence for Southern Californians, he began installing solar power systems and taught the first solar photovoltaic training course at the International Brotherhood of Electrical Workers (IBEW) Local 569 training hall. Since then, the company has grown to include over 100 employees, servicing San Diego, Orange and Riverside Counties, with over 8,500 installations including UC Irvine, Petco Park, the Port of Long Beach, Camp Pendleton, the United States Navy, UC San Diego and many more.

Sullivan Solar Power holds free, public community seminars once a month throughout Orange County. In teaming up with local environmental nonprofits, they educate the public on solar technology, policy, rates and available incentives. With education on the forefront and quality installations performed by state-licensed electricians for those who decide to go solar, the company has created thousands of solar advocates throughout Orange County who are contributing to a brighter future for the community.