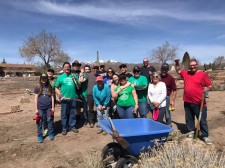 RENO, Nev., August 22, 2019 (Newswire.com) - The Sons and Daughters of Erin of Northern Nevada and Southern Nevada will be gathering volunteers to help clean up Reno’s historical, Hillside Cemetery Saturday, Aug. 24.

Hillside Cemetery is regarded as one of the oldest established cemeteries in Reno, NV and it has suffered severe neglect, vandalism, and threats from developers for decades. Currently, Hillside Cemetery Preservation Foundation’s small group of volunteers currently maintain the gravesites. However, it does require additional involvement from those in the community like the Sons and Daughters of Erin. Due to the proximity to the University of Nevada, Reno it is a prime location for further development. Local groups such as the Sons and Daughters Erin and the Hillside Cemetery Preservation Foundation are dedicated to preserving and protecting the area’s oldest cemetery through community involvement and education to save Hillside for future generations.

9 A.M. – 11 A.M. - Volunteers will be assisting with plot restoration by clearing rabbit brush, pulling weeds, etc. Tools, refreshments and restrooms will be provided.

11 A.M. - The Southern Chapter of SADOE will have a brief check presentation at 11 a.m. to go towards continued restoration efforts for the 30 Irish families buried there. Shortly after will be a guided tour led by the Foundations president, Fran Tyrone.

Established in 1969, The Sons and Daughters of Erin, a nonprofit Irish heritage organization is open to all folks with an interest in promoting Irish heritage and culture, enjoying camaraderie and serving those less fortunate in our community.

The Sons & Daughters is one of the oldest Irish clubs on the west coast. The club’s earlier incarnation, The Sons of Erin held its initial meeting at the Holiday hotel (formerly the Siena, now Renaissance Hotel) with 35 Irish enthusiasts. In 1996, it was renamed the Sons & Daughters of Erin. Over the club’s history, it’s made various contributions to the Northern Nevada community, including but not limited to: The establishment of St. Patrick’s Grove in Rancho San Rafael; Partnership with City of Sparks Adopt-a-Park program, Longford Park and Sparks sister City, Longford, Ireland events; Annual parade participation in Reno, Virginia City and Carson City; Painting shamrocks on the boardwalk in Virginia city, Dedication of the Blarney Stone & Leprechaun at the Fitzgeralds Casino in 1988 (Now Whitney Peak hotel), and annual participation in the Celtic Celebration since inception (Dinny Healy Co-Founder Sons and Erin also founded the Celtic Celebration in 1993); ongoing community events include the St. Patrick’s Day Annual Fundraising dinner & show, Founders Day Dinner, the Shamrock Blanchfield ceremony, Gatherings and ongoing Community service.

Source: Sons and Daughters of Erin

About Design on Edge

National Automobile Museum Celebrates 30 Years in Reno
Museum offers Free Admission and a Flashback to the Past
Design on Edge - Oct 27, 2019

Treats Not Tricks in October at National Automobile Museum
Special $2 admission for all ghouls, ghosts and goblins of all ages.
Design on Edge - Oct 20, 2019