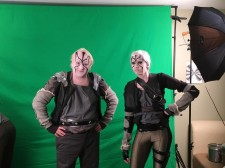 Los Angeles, CA, July 9, 2016 (Newswire.com) - Following in the footsteps of Mel Brooks, The Zucker Brothers and “Weird Al” Yankovic, Los Angeles based actor-comedian, Dennis Hurley, has his eye on being dubbed the new Prince of Parody with his latest parody of the new Star Trek Beyond film, called,

The online sketch is a parody of the new Jaylah character in the latest film, Star Trek Beyond.  In this spoof, "Jaylah" has to go save Star Fleet and the universe,... but not without a guilt trip from her dad.

In 2006, Dennis released his short, The Albino Code, a parody of The DaVinci Code which he wrote and starred in.  Dennis, an albino, himself, likes to poke fun at the sometimes cliched writing and casting choices Hollywood makes when it comes to people with albinism or people with disabilities, in general.
Please visit www.7fluidoz.com/albinocode for the full story.

Ten years ago, his parody was met with international acclaim, being featured on The Situation Room on CNN, MSNBC, Inside Edition, Fox News and written up in Boston Globe, a review by film critic Ty Burr.

Dennis is a Los Angeles based actor-comedian who began his career as a performer at Ithaca College in New York, he also received improvisational training from the Groundlings, the Upright Citizens Brigade Theatre and the Massachusetts-based ImprovBoston (where he studied with Kids In The Hall’s Kevin McDonald). Dennis is part of 2 Boston based sketch groups: Sawyer and Hurley and Friends of Gertrude and 2 Los Angeles based sketch groups:  TIM (with comeic and writer, Jamie Loftus) and iO West Sketch Team, Dynasty.

Dennis Hurley’s television and film credits include: The Daily Show, Tosh.0, True Nightmares, Unusual Suspects and Dennis appeared as a dancer / grocery store clerk in Justin Timberlake’s #1 song of Summer 2016, ‘Can't Stop The Feeling’. Currently, Dennis is performing stand up and sketch comedy in Los Angeles at such venues as UCB Sunset, The Comedy Store and iO West.  Dennis is also finishing up his next filmed parody sketch featuring his Donald Trump impression.

New Baywatch Trailer Parody...Definitely Not "Pale" in Comparison
Can you be albino AND a lifeguard? Actor/Comedian, Dennis Hurley, says...maybe?
DownCellar - Apr 24, 2017
Newswire