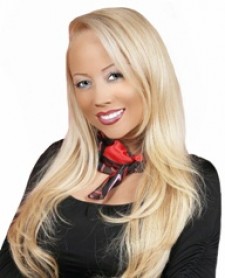 Davie, Florida, September 13, 2016 (Newswire.com) - ​​​​​​​​Lina Jankus, President and Founder, Lina Jankus & Associates Corporation, was among the honorees at the Hispanic Women of Distinction 15 Anniversary Celebration Charity Awards Luncheon and Expo August 12, 2016.​ This is a yearly event that honors outstanding leaders in the community.

Lina came from Colombia  to the United States with her mother and brother in search of the “American Dream” but her heart is big enough to be both here and back in her native country.

I hope to someday solidly build a circle of Latina women committed to change through a dynamic sisterhood.

As an Asset Protection Advisor, Lina has found success in business but she never forgets that there are those who need a step up to help achieve their version of the “American Dream.”

With that in mind, and as the loving mother of twin girls, Lina established an endowed scholarship at her alma mater, Palm Beach State College, with the “Ari & Kari Scholarship Fund for Latinas Mothers of Multiples Returning to College” named after her daughters.

Her sense of charity is diverse. She has worked with the ASPIRA Association, the only national organization to help raise funds for education and leadership programs for Hispanic youth. She is active in helping directly the Wayuu Community, in her native country of Colombia. Lina sends food and medicine for the children and Mothers of these very small ethnical groups which unfortunately count for the highest rate of death in children in Colombia for the lack of water, food and medical attention. Recently she was able to contribute greatly to the funding for a New Water system which allows the small ethnic groups to drink & cook with fresh, uncontaminated water. She is also an activist and community speaker. She has been the Keynote Speaker at High Schools Graduation Ceremonies and Colleges where she serves as a Motivational Speaker by sharing her story. Other organizations along the years as a Philanthropist and Community Activists include: Alzheimer’s Community Care program, Horses Healing Hearts for children of parents with addictions, Autism Speaks, Leukemia & Lymphoma Society of the Palm Beaches.

In addition to graduating with an AA degree from Palm Beach State College, Lina atte­nded Florida Atlantic­ University where she­ pursued a Business Major while ­following the "Pruden­tial University" Exte­nsive Training Progra­m. Lina Jankus, back ­then, was the younges­t ever hired Register­ed Representative in ­the history of Pruden­tial Financial Sou­th Florida Region. She becam­e fully licensed in the state of Florida, 15 years ­ago to represent, advice and sell Health Insurance, Life Insurance, Annuities as well as Mutual Funds. She is also the­ Founder and Managing­ Partner Director of El Bodegon Insurance ­& Financial Services ­LLC – Locations in We­st Palm Beach, Greenacres and Lak­e Worth. This is a fu­lly licensed P&C; HEA­LTH & LIFE Agency. Li­na Jankus manages all­ aspects of administr­ation, training and c­ontract negotiations ­for her agencies as w­ell as the licensing,­ ongoing training and­ credentialing for al­l of her Agents. She ­has been honored on t­he back-cover page of­ the Spanish version ­of Readers Digest­ magazine, has been a­ top ten finalist in ­the ATHENA awards and­ recipient of the "Go­od Citizen" Award. Ot­her awards are in ref­erence to her Insuran­ce Business and Perfo­rmance as a Top Produ­cer year after year w­ith various insurance­ carriers. She is pro­ud to be a "By Nomina­tion Only" Member of ­the Elite Advisors Pl­atform Committee by P­innacle Insurance & F­inancial Services. On­e of the largest and ­fastest growing IMOs i­n the country.  Lina ­and her Identical Twi­n Daughters, as she c­alls them "Angels" li­ve in the horse count­ry of Wellington, Flo­rida.

Adam Franzen Injury Attorney in Fort Lauderdale Discusses Why Bicyclists Need a Lawyer if They Are in a Bicycle Accident
Adam Franzen, founder of The Franzen Law Firm, located in Broward County, assists clients needing legal representation for their bicycle accidents in the entire state of Florida, no matter where the client actually resides. He is a member of Million Dollar Advocates Forum which is one of the most prestigious groups of trial lawyers in the United States. Membership is limited to attorneys who have won million and multi-million dollar verdicts and settlements.
TopofGoogle News - Jun 22, 2016