After delighting all at Voodoo Doughnuts in PDX, the life-size "Presidential" Voodoo Dolls are at Seattle's Art Primo, for the "Dirty Politics" art show running thru Election Day! 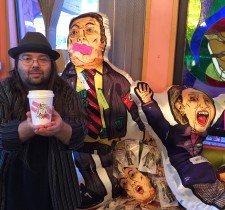 SEATTLE, WASHINGTON, October 21, 2016 (Newswire.com) - This election year, it’s just what we needed, Life-Size Voodoo Dolls of Trump and Clinton for public poking! They recently made a point at Voodoo Doughnuts (Oct. 5 & 6), and then in the windows of the gallery at Upper Playground in Portland for a weekend. Hundreds there came out to stick a pin in the candidates with their “wish” written on it.

Now, People of Seattle are welcomed to do the same - Write your wish for the candidate - one or both - on a slip of paper and pin it to the voodoo doll representations of Trump or Clinton. It’s happening at Art Primo, located at 415 East Pine Street Seattle WA, from now until Election Day everyone is welcome to participate.

The Voodoo Dolls are appearing in Art Primo’s “Dirty Politics” Show, full of great political art including the naked Donald Trump statue "The Emporer Has No Balls" that appeared on the streets of various cities courtesy of INDECLINE. The show ends Election Day.

Until America gets election reform with fair and accurate voting, a multiple party system, elected officials that actually represent the people they serve and voted for by an informed and politically engaged populace, voodoo dolls are what we have!

The Voodoo dolls came about as an art protest by Shane Bugbee, a conceptual artist who calls Astoria Oregon home. He was so distraught about the way the primaries turned out - especially for Bernie Sanders, he felt compelled to do something. He first created small voodoo dolls of the candidates as a limited edition offering for friends and collectors. (Available at artworkofprophecy.com $13 each or both for $20.)

Then, Bugbee created the life-sized versions of Trump and Clinton for an interactive work of public art. Asking participants to write a “Wish” for a candidate and pin it to them, offers a cathartic release, and creates a discussion about our voting and election system to hopefully encourage and advance a more representative government of the people.

The Dirty Politics Show opened on October 13th at Art Primo Gallery, it runs now thru the Election Day! The life-sized Voodoo Dolls will also be in Louisville KY before the election for poking in that region.

Donald Trump Voodoo Doll and Hillary Clinton Voodoo Doll Now Available From Artwork of Prophecy
Just in time for the election, limited edition Presidential voodoo dolls. Both Donald Trump and Hillary Clinton await the not so subtle pricks of angry Americans. These dolls will hopefully receive frustrations and bend the politicians to the users will. Artist Shane Bugbee hopes to also place life-size versions in galleries and museums around the county and allow viewers to write and pin their own wish or desire on the dolls as part of the exhibit.
Artwork of Prophecy - Jul 30, 2016