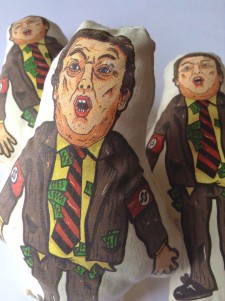 Portland, Oregon, July 25, 2016 (Newswire.com) - It’s election season and people are angry! Some are hating on Hillary, some are hating on Trump, some hate them both, but instead of feeling helpless and frustrated, “We The People” can now stick a pin in it! Really, stick a pin with all the feeling one can muster and watch the politicians bend to your will. It’s your pin, your wish.

These “1% Push Pin Politicians,” otherwise known as a black magic voodoo dolls, were created to help the disgruntled get their frustrations out! “It’s a positive protection for the people,”’ says artist Shane Bugbee who conceived the idea for the dolls and collaborated with fellow artist Grimore for the likenesses. “My idea was to help people motivate possible future presidents to their will and push the pendulum our way!” Bugbee adds.

These voodoo dolls serve to help voters release frustrations during what has been an extremely divisive campaign season, wrought with controversy. The artist behind the idea decided rather than spend the next few months yelling at the TV, radio, or newspaper, he would create something to at least help the voters feel better.

The dolls are hand-made, with a screen printed appliqué. They are just over 6 inches tall, and include a handful of hearty stick pins to let the user to make their intentions clear. These dolls are made one at a time in USA by angry Americans. Each voodoo doll is limited to 666 dolls and they are hand numbered.

Currently, the artist is looking for art galleries willing to show life-size versions of these dolls, he will then ask viewers to write their intent on a small slip of paper and push-pin it into the life-size candidate. For each pin of intent, there will be a donation box for which half of all proceeds will be donated to vote and campaign reform organizations in hope to change our system to one man, one vote, and get big money out of the process.

Life-Size Voodoo Dolls of Trump and Clinton in Seattle Asking for Pricks & Wishes From All
After delighting all at Voodoo Doughnuts in PDX, the life-size "Presidential" Voodoo Dolls are at Seattle's Art Primo, for the "Dirty Politics" art show running thru Election Day!
Artwork of Prophecy - Oct 21, 2016

Donald Trump Voodoo Doll and Hillary Clinton Voodoo Doll Now Available From Artwork of Prophecy
Just in time for the election, limited edition Presidential voodoo dolls. Both Donald Trump and Hillary Clinton await the not so subtle pricks of angry Americans. These dolls will hopefully receive frustrations and bend the politicians to the users will. Artist Shane Bugbee hopes to also place life-size versions in galleries and museums around the county and allow viewers to write and pin their own wish or desire on the dolls as part of the exhibit.
Artwork of Prophecy - Jul 30, 2016
Newswire