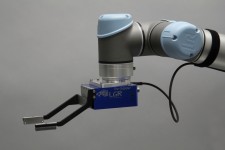 Carlsbad, California, June 1, 2016 (Newswire.com) - ​Let’s Go Robotics today announced that the US Patent and Trademark Office has granted patent #9,327,411 for a robotic gripper that eliminates common points of failure in robotics used in life sciences and other applications. The method is based on sensor-less force detection to avoid crushing and novel rack and pinion gears to avoid dropping. The patent is used in the Let’s Go Robotics electro servo gripper named The Gripster and used in a wide range of robotic systems. Let’s Go Robotics specializes in life sciences automation for the future.

“Our revolutionary gripper handles microwell plates without dropping, crushing or otherwise mishandling them,” said Brian Ganz, Let’s Go Robotics President. “These plates may contain drug discovery experiments worth thousands of dollars or drug trial testing materials that are irreplaceable. Our patented technology safeguards these experiments as plates are transferred between instruments.”

"Our revolutionary gripper handles microwell plates without dropping, crushing or otherwise mishandling them. These plates may contain drug discovery experiments worth thousands of dollars or drug trial testing materials that are irreplaceable. Our patented technology safeguards these experiments as plates are transferred between instruments."

The patented robotic gripper detects the presence of an object such as a microwell based on force rather than a sensor. Once force is detected, power is held constant, eliminating the risk of crushing. Only a small amount of current is required, avoiding common overheating problems. Force is created by a small stepping motor driving mechanical gears and is fully programmable for each environment. Grip forces are varied automatically based on plate width, and whether the plate is lidded or un-lidded, empty, full or partially filled. Objects can be gripped in landscape and portrait orientation.  Software is included to setup the gripper for unique applications.   No plastic is used, just all precise bearings and machined aluminum for quality and longevity.

The gripper uses rack and pinion gears with a worm drive to eliminate dropping risk. The worm drive turns the gears but the gears cannot turn the worm drive. As a result, the gripper cannot lose its grip on a microwell plate. A manual override button can be pressed to free a plate, at the gripper if needed. Other features covered in the patent include top and rear mounting options and collision detection to protect the microplate.

The Gripster can retrofit most robotic arms and positioners. Its built-in controller easily interfaces with robot controllers. Let’s Go Robotics regularly works with scientists and engineers to get the best fit for their laboratory automation needs.  Other features include a bar-code reader mounted on the gripper, along with additional I/O for future automation support.

“Grippers are an extremely important component in life science robotics and a common point of failure,” said Ganz. “This patent recognizes the innovative nature of our robotic gripper and represents a significant improvement in reliability in unattended laboratory operations.”