Let Them Sleep! Late Start for Students Yields a Lifetime of Benefits 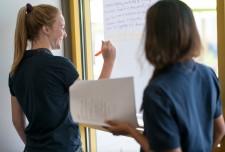 LOS ANGELES, October 15, 2019 (Newswire.com) - While California recently became the first state to mandate later start times at public schools, Campbell Hall was one of the first schools in the country to move to a late-start model.

Beginning in the 2011-12 school year, Campbell Hall, in response to medical research that indicated biological sleep patterns shift in adolescence, adjusted start times for grades 7-12 to 8:50 am four days a week and 9:30 am on Wednesdays. This was ahead of a 2014 policy statement issued by the American Academy of Pediatrics calling for schools to move start times to 8:30 am or later for middle and high schools.

Because teenagers have difficulty falling asleep at night, more sleep is needed in the morning. According to the Centers for Disease Control: “Not getting enough sleep is common among high school students and is associated with several health risks including being overweight, drinking alcohol, smoking tobacco, and using drugs, as well as poor academic performance. One of the reasons adolescents do not get enough sleep is early school start times.”

Campbell Hall’s long history of instituting research-driven best practices led to the school’s new schedule. “As part of our holistic approach to education, we prioritize the health and wellness of all our students,” said Headmaster Julian Bull, adding, “The late-start research made it overwhelmingly clear that this would be a monumental benefit to our developing teenagers. Since its implementation, we’ve seen a dramatic shift in both the academic achievements of our secondary students as well as their overall emotional well-being.”

Students report having more energy and focus as a result of the adjusted school schedule. “I was so relieved to have a later start time,” said a ninth grade student new to Campbell Hall. “My last school started early and I had trouble focusing in my first class. Being able to sleep later makes me less stressed because I am more rested, which helps be more productive during the day.”

Campbell Hall is a leading private coeducational day school for grades K-12 located in Studio City, CA. Their mission is a community of inquiry committed to academic excellence and to the nurturing of decent, loving, and responsible human beings.