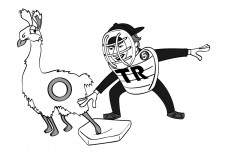 Lexie Hein, an adult LearningRx graduate from Appleton, Wisconsin designed the winning idea for adding President-elect Donald Trump to LearningRx’s existing picture-graphic lineup of U.S. Presidents. Lexie suggested a baseball umpire with TR on his chest padding, “TR-Ump” which connects to President Obama by having the “O llama” extend his back leg on home plate, as the TR umpire signals he is safe. A graphic illustrator created the final artwork, which will be part of LearningRx’s full Presidential mnemonics images.

LearningRx helped me learn how to learn.

Lexie, who decided to go through brain training in 2011, was having difficulty passing her medical boards even though she had always been a good student. After LearningRx brain training, Lexie said that she was able to pass her boards and recently graduated from Medical school. She said that through LearningRx training, she “learned how to learn.”

The contest is derived from one of the first activities every LearningRx student masters: the ability to recite the names of all (now) 45U.S. Presidents. The memory picture-graphic combines silly pictures and fun associations to help students “picture” what they want to remember—in the order they need to remember it.

For example, in the attached graphic, you first see a can of D’s, and that sounds sort of like Kennedy. And that can of D’s is leaning into a yawning sun (Johnson), which is getting nicked (Nixon) by a Ford (Ford) balanced in a cart (Carter), beneath which is a ray gun (Reagan) shooting at a bush (George H.W. Bush) holding up a clothesline for hanging a clean ton (Clinton) of clothes. Of course, the other end of the clothesline is tied to another bush (George W. Bush) from which an “O” llama (Obama) is eating a leaf.

To see the mnemonics exercise in action, visit the website for our other Presidents Day contest, which shares video entries from former and current LearningRx students doing the Presidents visualization procedure while multitasking and/or being distracted: http://studentshoutouts.com/presidents-day/

LearningRx, headquartered in Colorado Springs, Colorado, is the largest one-on-one brain training organization in the world. With 80 Centers in the U.S., and locations in 40 countries around the globe, LearningRx has helped more than 95,000 individuals and families sharpen their cognitive skills to help them think faster, learn easier, and perform better. Their on-site programs partner every client with a personal brain trainer to keep clients engaged, accountable, and on-task a key advantage over online-only brain exercises. Their pioneering methods have been used in clinical settings for 35 years and have been verified as beneficial in peer-reviewed research papers and journals. To learn more about LearningRx research results, programs, and their 9.6 out of 10 client satisfaction rating visit http://www.learningrx.com/.

A personal one-on-one brain training company, which has a network of 80 locations across the United States (www.LearningRx.com) and 400 professionals over 45 countries (www.BrainRx.com). In 2017 LearningRx celebrated 100k brains trained.