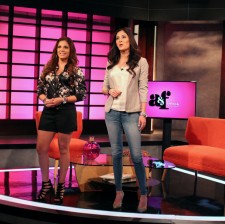 On LATV, Armida y la Flaka will feature a different approach than on its radio incarnation. While it will maintain the essence and chemistry of Armida y la Flaka’s close relationship, it will also cater towards a younger, more bi-cultural, bilingual millennial audience.

Produced at the LATV’s state-of-the-art HD studios in Los Angeles, this unique talk show will feature these bold, empowered Mexican women exploring a variety of topics that range anywhere from personal experiences, expert advice on a wide range of topics, community driven issues, as well as fashion, music, health, positive relationships, and culinary tips you won’t find anywhere else.

"We are thrilled to have Armida y la Flaka join the LATV family. Their light-hearted humor and lasting connection to the community makes them a great asset for the network and an outstanding vehicle for national brands that are looking to successfully engage the highly coveted bi-cultural Latina demographic," commented Luca Bentivoglio, LATV’s COO and Head of Programming.

LATV is the only remaining Latino-owned TV network in the Hispanic television space. Its programming primarily targets U.S.-born Latinos and the coveted bi-cultural 18-49 Latino demographic, with content that features originally-produced shows in Los Angeles, as well as licensed content that has never before been seen in the U.S. For more go to www.LATV.com.