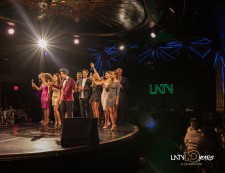 The event will feature an exclusive presentation highlighting LATV's landmark milestone, its remarkable growth and evolution in the last decade, the continued success of its syndicated shows American Latino and LatiNation, plus new partnerships, new platforms, and most importantly, giving insiders a sneak peak at the network's highly anticipated, new original productions.

It's been an exciting Upfront season so far. Our new programming and content partnerships have been very well-received by our clients and have generated a lot of interest. I am confident that we'll be in a very good spot when we finish with negotiations.

"It's been an exciting Upfront season so far. Our new programming and content partnerships have been very well-received by our clients and have generated a lot of interest. I am confident that we'll be in a very good spot when we finish with negotiations," said Andres Rincon, Vice President of Network Sales. "I'm thrilled to be culminating our roadshow and 10th year celebration in Los Angeles, where it all started for the network a decade ago!"

LATV has distinguished itself as ground zero for content that caters to a multicultural audience who fall within multiple levels of acculturation, from generations 1.5 and above. More than ever, the network's ambitious initiatives and programming puts on display LATV's strong commitment to its viewers.

Some of the 2017/18 programming highlights include:

Get It Girl – An all-girl millennial talk show standing for female empowerment and highlighting progressive ideas through candid discussions, personal experiences and relationships.

Chronic Tacos – A reality show starring Jason "Wee Man" Acuña, from MTV's Jackass, documenting his mission to take his Chronic Taco franchise to the next level.

Fan Nation – A show created for sport fans by sport fans. Brings you a weekly recap of all the major sport leagues, with exclusive interviews, unique in-depth analysis and outrageous commentary you won't find anywhere else.

LATV will highlight four new content partnerships that will be launched as early as mid to end of 3Q'17:

mitú – A weekly TV compilation show with the best videos from mitú, the digital media powerhouse that brings a Latino point of view to mainstream entertainment across multiple platforms.

People en Español – This exciting collaboration will give LATV total access to People's celebrity programming as well as exclusive looks behind the scenes of their monthly cover shoot.

Armida y la Flaka – The entertaining and outgoing hosts of one of the most popular Entravision's radio shows in the U.S. bring their unique perspective on current events, celebrity gossip and a special connection to the Latino community.

Trending Machine – A daily, live and interactive program, in collaboration with Maraca, a recently created outfit producing content for and by Millennial influencers.

About LATV:
LATV is the only remaining Latino-owned TV network in the Hispanic television space. Its programming primarily targets U.S.-born Latinos and the coveted bi-cultural 18-49 Latino demographic, with content that features a originally produced shows in Los Angeles. For more go to http://www.LATV.com.