Labor Day Wake Up Call: Debbie Wasserman Schultz Presides Over a High Unemployment Rate, and Miami-Dade and Broward Counties Have Not Recovered Since 2008 Financial Disaster

Debbie Wasserman Schultz' tenure in the U.S. House of Representatives overlooked Fannie Mae's excesses, resulting in the Financial Disaster of 2008. Unemployment levels in Miam-Dade still have not gotten better than in 2007. Miami-Dade County unemployment is now at 5.4% . The unemployment rate has gotten worse in Broward County over the last 4 months to 4.50%. Broward and Miami-Dade make up District 23, where Wasserman Schultz is running for re-election to the U.S. House of Representatives. 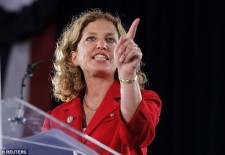 Miami, Florida, September 7, 2016 (Newswire.com) - ​​Labor Day Weekend is all about celebrating the labor force--the backbone of the country, the people in the U.S who work hard for decent wages. There is a nobility to hard work and decent pay. However, the people in District 23, where Debbie Wasserman Schultz is running for re-election to the U.S. House of Representatives, are still suffering huge unemployment levels worse than before the Great Recession in 2008.

http://unemployment-rates.careertrends.com/l/2731/Miami-Dade-County-FL These numbers show how Miami-Dade still hasn't recovered to the levels since the 2008 disaster. Broward unemployment figures have gotten worse also in the last 4 months.

​If only the majority House Democrats like Debbie Wasserman Schultz had monitored or supervised quasi government/business entity Fannie Mae much better in 2006, it would not have dived into the Mortgage Backed Securities market which was like starting a gasoline fire to the global economy. Our country might not have experienced the Great Recession in 2008 if Representatives in the House had questioned improprieties or haste and the gambling attitude of Fannie Mae, which turned a greedy eye on the housing market and wanted to get in while it was good. The houses were overpriced, and people were in over their head not able to pay. Congress was supposed to regulate Fannie Mae. It didn't happen. In 2008 the economy took a nosedive. Debbie has been a partisan House Democrat loyal to Obama, and her eyes were not on the ball holding Fannie Mae accountable.

Many District 23 voters lost their homes and went bankrupt due to the Great Recession. Many lost their jobs permanently, and many have given up seeking work even till today. Many of those who have graduated can't find decent jobs and have to find part time work or several part time jobs in order to make ends meet. Many cannot pay their student loans which could be over $100,000 to $300,000 dollars.

The Labor Participation Rate is Extremely Low in 2016. Many People Have Given Up Seeking Employment.

The graph at the link above shows that the rate of people not wanting to work or have given up completely is at very high levels like it was in the late 70's. Young people also are not carrying the good tradition of a solid day's work bringing in a solid wage. Some people will attribute the  Labor Participation Rate to more Seniors retiring, but there are many young and median age people who have just given up looking for jobs.  South Florida should have more high quality pay jobs that attract people to get into the job market.

Is there another option for District 23 Voters on November 8th?

Joe Kaufman is the GOP nominee opposing Wasserman Schultz in the November 8th election. He is the most anti-establishment candidate running against Debbie Wasserman Schultz who seems to be business as usual. Joe Kafuman is for less business regulation, more job opportunities, and protecting Social Security for generations. His website is http://kaufmanforcongress.com/​ Many voters of Tim Canova are still reeling about how Debbie allegedly rigged the DNC against Bernie Sanders. Now that Tim Canova has lost in the primary August 30th to Debbie, the next opponent in the national election to Debbie Wasserman Schultz is Joe Kaufman. Based on Wasserman Schultz’ negative qualities and actions, many Democrats may want to display their disappointment, frustration and anger against her and vote for Kaufman. Debbie only won her primary August 30th by around 7,000 votes. There were around 21,000 voters who voted for Tim Canova. As Kaufman states, “My appeal to his [Canova’s] and Bernie Sanders’ voters is to vote their conscience and help me bring down the establishment, which Debbie represents. When I get to Washington, I will be the servant to all of my constituents, whether they are Republican, Democrat, Libertarian or anything in between.”

A class action lawsuit was filed against Wasserman Schultz regarding her role in the scandal of her alleged rigging of the Democratic primaries as head of the DNC, which destroyed Bernie Sanders’ chances of winning the Democratic nomination for President. An evidentiary hearing began on August 23 in South Florida, where both parties had to present evidence to support their positions. The results of the hearing are not yet known, but the fact that the case proceeded to this point speaks volumes for Wasserman Schultz’ alleged mishandling of the DNC primaries.  Debbie had to resign from the DNC when the Wikileaks emails came out showing employees trying to steer Democrats against Bernie Sanders during the Democratic Party Primary. Right after Debbie resigned, she was hired by Hillary Clinton. This brings up sincere question if Debbie was rewarded for helping Hillary in the Democratic Primary.

Debbie Being in D.C. Since 2004 as Rep of District 23 Has Attracted Big Company Lobbyists to Pay for Influence.

It's just a matter of fact occurrence for Incumbents to receive big money from influential industries. ​In the past eight years, Wasserman Schultz has taken increasingly larger campaign contributions from "Big Sugar", amounting to a large total sum of $133,000. That’s quite a lot for a congresswoman from one district, especially since she has barely faced any sort of legitimate political opposition before 2016 – What did she need all of that money for?
Debbie has also received contributions from the Big Pay Day Lending Industry which has taken advantage of the poor in District 23 with high interest rates that could leave people in perpetual debt just for cashing checks and not having a regular bank account. People could cash Social Security checks but then pay big fees to be able to do so.

​Labor Day Focuses on Workers, and Are Workers in District 23 Better Off Now than 9 years Ago?

Florida District 23, from Weston to Miami Beach, may want to choose a higher standard of representation than what has been given to them under Debbie Wasserman Schultz. After recent evidence suggesting rigging the Democratic Party primaries against Bernie Sanders and a lost decade of major job productivity under Debbie's tenure, people are reconsidering not voting for her again.

Bright Star Pac urges District 23 voters to drop her in the national election November 8th, 2016. Bright Star Pac feels strongly about helping the country make changes away from comfortable establishment politicians. People who want to see District 23 have a better unemployment rate and job opportunities can consider donating to Bright Star Pac’s efforts in “Supporting a Better Future for America”, by visiting their website at http://brightstarpac.net/.