District 23 Voters Can Remove Debbie Wasserman Schultz From Office With Their Vote on Tuesday, November 8.

Voters in District 23 should look beyond re-electing Debbie Wasserman Schultz. Wasserman Schultz is Clinton's lackey. She seems to care more about promoting herself within the Democratic Party than representing the voters in District 23. Voters have an opportunity to oust her from office when they vote November 8th. Links to voting locations are below to help voters get to their precinct Nov 8th. 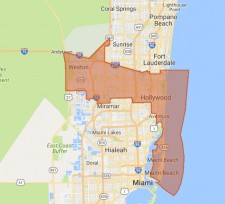 Miami Beach, FL, November 7, 2016 (Newswire.com) - ​​​​​​​​​​Voters in District 23 should look beyond re-electing Debbie Wasserman Schultz. Wasserman Schultz is currently Hillary Clinton’s lackey as Hillary runs for President on November 8th. Wasserman Schultz has been very busy campaigning for Hillary Clinton for her presidential campaign, and Debbie seems more interested in promoting herself within the Democratic Party than representing the voters in District 23. Bright Star Pac explains important issues at stake in the Tuesday November 8th Election.

​A Vote of Protest Against the Establishment for Tim Canova Voters

Are you tired of the establishment and career politicians that could be bought? November 8th is the day to reject the establishment and vote against Debbie Wasserman Schultz. Debbie represents the Etablishment; the big money interests such as the payday loan industry and the big sugar industry. We have lost many jobs within District 23 and had a low GDP growth rate average for 10 years! It's time for a change.

Disillusioned and disgruntled Bernie Sanders voters, who voted against Debbie for Tim Canova in the Democratic primaries, can exact the ultimate protest against the establishment by voting for Joe Kaufman, the Republican candidate running against Wasserman Schultz for US Congressman in District 23. Instead of supporting the disgraced former DNC chair, who allegedly rigged the primaries against Bernie Sanders, Democrats may want to consider crossing party lines in this election. Tim Canova only lost by around 7,000 votes in the political primary, Debbie getting 28,279 versus Tim Canova's 21,504.  If Tim Canova voters want to rebuke Debbie for not representing District 23 properly, they have the chance on Tuesday November 8th to vote for Debbie's opponent Joe Kaufman.

JOE KAUFMAN opposes the Trans Pacific Partnership (TPP), which has been highly secretive and which allows other nations to manipulate their currencies.

JOE KAUFMAN favors Medical Marijuana for those with debilitating diseases, like his mom who has Multiple Sclerosis.

JOE KAUMFAN opposes the US getting involved in the conflict in Syria, which has pinned terrorist against terrorist.

DEBBIE WASSERMAN SCHULTZ  vocal supporter of the US getting directly involved in the war.

JOE KAUMFAN  Opposes 10,000 un-vetted Syrian refugees to settle in the US.

DEBBIE WASSERMAN SCHULTZ On favor, offensively comparing these potential ISIS and al-Qaeda members to Jews who survived the Holocaust.

JOE KAUMFAN  is one of the first politicians to come out against the immigration detention center that was planned to be built in Southwest Ranches.

DEBBIE WASSERMAN SCHULTZ wrote a letter in support of the detention center.

JOE KAUFMAN Opposes unnecessary regulations and supports tax cuts to bring jobs back to America and save the Middle Class.

DEBBIE WASSERMAN SCHULTZ uses class warfare against those who create jobs, which results in the loss of further jobs to other nations and the destruction of the Middle Class.

JOE KAUFMAN Supports making America 100% energy independent, so that we stop purchasing our fuel from nations who carry out horrific human rights violations.

DEBBIE WASSERMAN SCHULTZ wants to destroy US jobs with a war on the fossil fuels industry.​

Wasserman Schultz cannot be trusted to lead District 23 and support the citizens of Broward and Miami-Dade counties. Her incompetence and blind following of the corrupt Clintons should be a sign to all voters that she is only interested in advancing her career. Combined with the alleged rigging of DNC and voting for the Iran deal just to make Obama happy (completely disregarding Jewish voters in the process), Debbie is not a candidate working for the citizens. Immediately upon having to resign from the DNC following the Wikileaks revelation about the treatment of Bernie Sanders, Wasserman Schultz was hired by Hillary Clinton for President team, where her true loyalty and focus resided. District 23 for her seems like a springboard to greater ambition.

List of Bad things Said and Done to Bernie Sanders in the DNC when Debbie Wasserman Schultz was the presiding chairperson of the DNC during the Democratic Party Primaries.

Voters need to strongly critique Wasserman Schultz' past actions and determine whether she is trustworthy enough to run their district. Why should voters even trust her enough to vote for her if she sabotaged the election of Bernie Sanders?  Debbie Wasserman Schultz has also represented South Florida voters for over 10 years, over a GDP growth rate average of below 3% and a high unemployment rate for many years.

It's time for voters to let her go.

​Voters in Broward County can find voting sites and times at http://www.browardsoe.org/.  Click on “Where Do I Vote?” and enter your address to find your voting location.

Voters in Miami-Dade County can find their information at http://www.miamidade.gov/elections/.  Be aware that some voting locations have changed. To better serve their voters, Miami-Dade County has redrawn voting precincts in time for upcoming elections. So please check the site to ensure you vote at the proper location.

It’s important to know that District 23 now includes parts of Plantation, Florida, in addition to Broward and Miami-Dade Counties and the cities of Weston, Dania Beach, Pembroke Pines, Hollywood Beach, Hallandale and Miami Beach. See the map below for district boundaries. If you are unsure of your district, you can visit http://www.house.gov/representatives/find/​ and enter your zip code.

District 23 now includes parts of Plantation, Florida, in addition to Broward and Miami-Dade Counties and the cities of Weston, Hollywood and Miami Beach, among others. See the map below for district boundaries. If you are unsure of your precinct or district boundaries, you can visit http://www.house.gov/representatives/find/​ and enter your zip code.

For more information about Debbie Wasserman Schultz and Joe Kaufman, go to www.brightstarpac.net

Debbie Wasserman Schultz Presides Over U.S. Record 10th Straight Year Without 3% Growth in GDP
In the 85 years for which the Bureau of Economic Analysis (BEA) has calculated the annual change in real Growth Domestic Product (GDP), there is only one ten-year stretch—2006 through 2015—when the annual growth in real GDP never hit 3 percent. This is during Debbie Wasserman Schultz' representation of District 23 in the U.S. House of Representatives. Bright Star Pac investigates the GDP, unemployment rate, and labor participation rate numbers.
Bright Star Pac - Sep 21, 2016