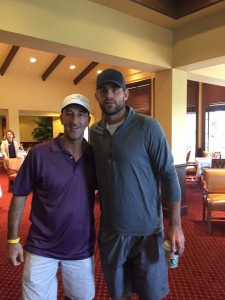 Miami, FL, January 6, 2017 (Newswire.com) - The Koretsky Family Foundation has sponsored yet another great event, this time for the Special Olympics of South Florida. Special Olympics Florida's 2016 Aim higher Tennis Pro-AM, held at the Diplomatic Golf and Tennis Club, promised to be a fun event for people of all ages.

Frank Koretsky, founder of Koretsky Family Foundation, and his daughter, Nicole Koretsky, were on site early this month to help set up for this successful event.

Heavy rain forced the event inside for Saturday but the group made the best of the day with special guest Andy Roddick and Bob Bryan having an intimate meet and greet as well as an extensive Q&A session with all those who attended.

Later in the day they capped off an entertaining afternoon by talking with fans and allowing Special Olympics athletes to hit some tennis balls with Andy and Bob. Overall the event was considered a great success and helped raise some serious money for the Special Olympics of South Florida.