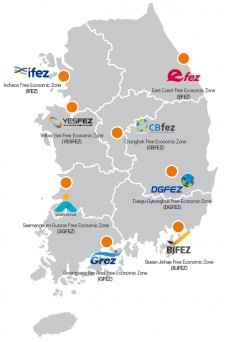 Sejong, Korea, December 9, 2016 (Newswire.com) - ​​Once referred to as the “Hermit Kingdom,” Korea is a hermit kingdom no longer. Today, Korea has embraced its central location – and why not? Its proximity to the major Asian markets makes it the most efficient economic hub not only for China, Japan, and Korea but for the rest of Asia as well. Indeed, Korea’s Free Economic Zones (KFEZ) were developed to fully exploit this enviable location.

The eight Free Economic Zones (Incheon FEZ, Busan-Jinhae FEZ, Gwangyang Bay Area FEZ, Yellow Sea FEZ, Daegu-Gyeongbuk FEZ, East Coast FEZ, Chungbuk FEZ, and Saemangeum-Gunsan FEZ) are scattered throughout Korea to suit the needs of enterprising businesses and are remarkable for the lengths to which the government of Korea has gone to create business friendly environments in those zones.

"When we received the proposal from IFEZ to establish our own building here, we recognized it as a good financial proposal. We could not wish for much more. We have met our objectives and we haven't regretted our investment here."

Korea’s Free Trade Agreements with a whopping 52 countries top the list of reasons for companies wanting to do business in Korea. For many outsiders, it would seem counterintuitive for a Chinese company to set up shop in Korea. Not so, says Lu Xianyu, CEO of the Chinese enterprise HAM Global. While it’s true that wages and production costs are lower in China, he cites Korea’s impressive number of FTAs as the basis for his decision to move his operations to the GFEZ (Gwangyang Bay Area Free Economic Zone). “China doesn’t have as many FTAs,” he explains, “so exporting my products to other countries is more easily done here.” Korea’s accessibility to over fifty countries with populations exceeding one million only adds luster to these FTAs. For Mr. Lu, in Korea, China is close, but so are the Philippines and Indonesia – his target markets.

Development is still ongoing for many of the economic zones, but the government of Korea has already spent billions of dollars on laying the infrastructure to facilitate the emerging high-tech, international business, leisure, and tourism hubs there.  For a country whose infrastructure and public transportation systems have already been the envy of the world, they are often cited as key advantages by allowing businesses to reduce operating costs, shorten delivery times and provide better customer service.

In many ways, Korea’s Free Economic Zones are an exercise in the synergy between the diverse industries located there. The cities have attracted numerous businesses from all over the world, and while almost everyone acknowledges that the Korean labor force is highly educated, there is always the question of whether good workers are hard to find due to many of the cities’ distance from major population centers.  This isn’t the case, Mr. Rotermund, Managing Director of Rittal Korea, insists. “When we moved here from Seoul, no one left the company,” and points out that when it comes to recruiting new personnel, good workers are not difficult to find, as “IFEZ (Incheon Free Economic Zone) also has a very highly qualified labor force. There are quite a few universities in this area. Our relocation to IFEZ is not something that has affected our ability to hire good labor.”

One of those universities in IFEZ is the State University of New York – SUNY Korea. Because courses are taught by Stony Brook faculty, and students undergo the same selective process as those who apply to any other SUNY school, a SUNY Korea degree is identical to those given at Stony Brook University in New York – a fact that has generated a great deal of public interest for the school. James F. Larson, the Vice-President of Academic Affairs at SUNY Korea declares SUNY Korea to the “best-kept secret in study abroad right here. What we’re building here is a program that will be internationally competitive.”  Many of the students at SUNY Korea are bilingual or even trilingual, which makes them highly globalized and competitive.

Similar scenarios are playing out in the other economic zones in Korea, as higher education campuses have been a visible presence in these economic zones.

KFEZ has taken concerted action to keep the business and living environments in the economic zones friendly towards foreign-invested enterprises and conducive to international businesses by offering tax breaks, financial support, and other incentives. “The government has created a good environment for doing business,” Mr. Lu in GFEZ stresses. Mr. Rotermund echoes this sentiment. “When we received the proposal from IFEZ to establish our own building here, we recognized it as a good financial proposal. We could not wish for much more. We have met our objectives and we haven’t regretted our investment here.”