With a live appearance by the Director Quentin Lee and the Original Cast. 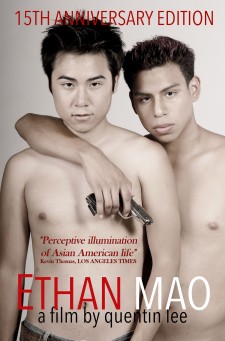 A perfect movie to kick off LGBT Pride Month, Ethan Mao is the acclaimed feature by Quentin Lee that world premiered at AFI Fest 2004 and won the Audience Award at the 2005 Turin International Gay and Lesbian Film Festival. Kicked out of his house because he's gay, Ethan Mao returns home to steal and ends up holding his family hostage on a fateful Thanksgiving Day. The film is written and directed by Quentin Lee, starring Jun Hee Lee, Raymond Ma, Julia Nickson, Kevin Kleinberg, Jerry Hernandez and David Tran. The digital restoration was supported by UCLA Film & TV Archive and Outfest’s Legacy Project.

The Japanese American National Museum and CHOPSO will present the FREE SCREENING of Ethan Mao on Saturday, June 8 at 8:00pm at National Center for the Preservation of Democracy at the Japanese American National Museum, 100 N. Central Avenue, Los Angeles, CA 90012.The original cast and Director Quentin Lee will appear at the Los Angeles Screening for a Q&A after the film screening.

On June 18, Ethan Mao will be available on VOD worldwide via iTunes, CHOPSO and Amazon Instant Video.

The mission of the JAPANESE AMERICAN NATIONAL MUSEUM is to promote understanding and appreciation of America’s ethnic and cultural diversity by sharking the Japanese American experience. For more information about the museum, go to www.janm.org.

For publicity images and resources:

Chopso is Proud to Announce the Nov. 2nd Launch of the World's First All-Asian, All English-Language Streaming Service With Esteemed Partnerships in Content Creation and Exhibition.
CHOPSO - Oct 6, 2017