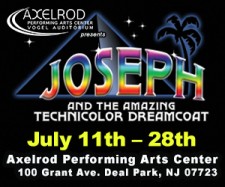 OCEAN TOWNSHIP, N.J., June 24, 2019 (Newswire.com) - ​​Josh Canfield (NBC’s Survivor fame and Broadway’s “Natasha, Pierre and the Great Comet of 1812”) debuts in the Axelrod PAC’s musical “Joseph and the Amazing Technicolor Dreamcoat,” alongside Peter LaPrade (“The Lightning Thief: The Percy Jackson Musical”) in the title role, and Amma Osei (Broadway’s “Rock of Ages”) as the Narrator. The musical runs for 15 performances from July 11 through July 28.

Directed and choreographed by Matthew Steffens, “Joseph…Dreamcoat” was Andrew Lloyd Webber and Tim Rice’s first musical and remains their most popular family show. Lloyd Webber and Rice went on to write other smashes including “Evita,” “The Phantom of the Opera” and “Cats.”

The Axelrod PAC, Broadway at the Shore, is located in the Deal Park section of Ocean Township. A professional theater since 2017, it routinely features the talents of Broadway’s leading actors, dancers, directors and designers.

“Our audiences have come to expect the highest caliber of performers on our stage,” says Artistic Director Andrew DePrisco, “and the cast of ‘Joseph’ is absolutely among our finest. We’re also thrilled to have secured Mr. Steffens’ services as director-choreographer.”

In the role of the Narrator, Amma Osei comes to the Jersey Shore from the Broadway cast of “Rock of Ages,” where she played both Justice and Mother. “Amma has one of the most astonishing voices I’ve ever heard. It’s a rock voice with a gospel extension that is so huge you can’t help but laugh out loud in disbelief ... She’s remarkable in every way,” says DePrisco, who assists with casting each musical at the theater. “After auditioning dozens of amazing Equity actors for the role, Amma made our selection very easy!”

The title role of Jacob’s favorite son will be played by the up-and-coming New York actor Peter LaPrade, who’s starred Off-Broadway (“This Ain’t No Disco”), and the Pharaoh will be played by Josh Canfield, known originally for the reality TV show “Survivor” and Broadway’s “Great Comet” and “Doctor Zhivago.” He appeared most recently in the National Tour of “Falsettos.”

“Joseph…Dreamcoat” will be directed and choreographed by Matthew Steffens (Broadway “Promises, Promises,” “Women on the Verge,” and “Doctor Zhivago”) with musical direction by Andrew Sotomayor, lighting design by Andrew Griffin, sound design by Kevin Johnson, costumes by Fred Mayo, set design by Fred Sorrentino, and properties by Susan Bloir.

“Joseph and the Amazing Technicolor Dreamcoat” runs July 11 through July 28. Tickets can be purchased at www.axelrodartscenter.com and range from $38 to $64. Group rates are available for parties of 10 or more. The theater, which is located at 100 Grant Ave. in Deal Park, New Jersey, is handicap accessible and provides free, ample parking on-site.

The Axelrod Performing Arts Center is New Jersey’s newest professional theater, specializing in the production of musical theater. APAC fosters artistic excellence by showcasing varied and distinct cultural programs that enrich the imaginative, intellectual, and creative soul while cultivating an appreciation of diverse communities through the pursuit of the arts. For more information, please visit www.axelrodartscenter.com.