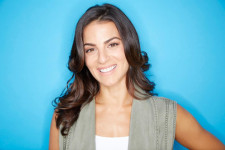 Renée Marino is an accomplished communication coach who just worked with heavy-hitters of the Knowledge Industry, Tony Robbins and Dean Graziosi when she co-hosted their first-ever virtual World Summit. She spent many years as an actress on Broadway and played the female lead role of "Mary Delgado," in the film Jersey Boys, directed by Clint Eastwood, where she was highlighted in the Huffington Post, which stated: "The Broadway star—who is basically Tina Fey's celebrity doppelganger is a scene-stealer, spouting swears and put-downs with aplomb. Jersey Boys pops whenever she's onscreen." Renée has inspired people around the world with her energy and authentic spirit. She has spoken, performed, and been interviewed on thousands of live and virtual stages.

In Becoming a Master Communicator, Renée Marino guides readers to use technology as an effective tool, without solely relying on it for communicating with others. Marino knows that cell phones and computers provide an incredibly convenient level of connection with the world, but she points out how screen-based communication is often indirect and can cause disconnect within relationships.

Through various personal stories and easy-to-implement practices, Renée Marino leads women and men back to authentic, intentional communication in their relationships by knowing when to use technology and when to put the devices down and have a direct conversation. She illustrates how communication is the foundation of personal and professional relationships, and that when we become Master Communicators, we become unstoppable.

As a film actress, Renée Marino played the female lead role of "Mary Delgado" in feature film Jersey Boys, directed by Clint Eastwood, and was featured in People.com "Ones to Watch," as well as Variety Magazine and The Huffington Post. She's a seasoned Broadway performer who was a member of the casts of Pretty Woman, West Side Story, Jersey Boys, Chaplin, and Wonderland, and on the national tours of Cats, Disney's High School Musical, and Jersey Boys. She's also appeared on television in The Marvelous Mrs. Maisel (Amazon Original) and Weird Loners (Fox). Renée wrote and performed her solo show called, "I Am Me, Because of Three," which received incredible reviews and sold out venues in both NYC and LA.