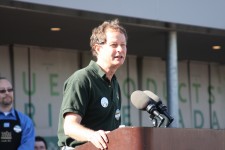 John Mackey, Whole Foods Market and Conscious Capitalism boards of directors have an opportunity to reach millions with an important message. Instead of maintaining the societal norm of silence around these issues, I would like to see them take a stand against child sexual abuse publicly — take a leadership role. Mackey should disavow Marc Gafni.

The New York Times first reported Mackey's association with Gafni in December 2015. The Times reported Gafni describing one of his accusers:

"A co-founder of Whole Foods, John Mackey, a proponent of conscious capitalism, calls Mr. Gafni 'a bold visionary.' He is a chairman of the executive board of Mr. Gafni’s center, and he hosts board meetings at his Texas ranch."

The Times' story precipitated a wave of follow-up items.

The New York Daily News reported Gafni denying allegations of abusing two girls in the 1980s, then ages 13 and 16; he stated they were willing partners.

Sara Kabakov identified herself as the then-girl whom Gafni described as "14 going on 35." She came forward publicly for the first time, writing in the Forward: "I Was 13 When Marc Gafni's Abuse Began."

More than 100 rabbis and Jewish leaders undersigned a petition to Whole Foods: "Stop Marc Gafni from Abusing Again," citing, "many, repeated and serious allegations, both public and private, former and recent."

Mackey silently vacated his position as board chair of Gafni's nonprofit in April, according to the Forward.

The Washington Post reported on coordinated protests at Whole Foods stores in New York City and Los Angeles in May 2016.

Mackey issued a statement in June, declaring his loyalty to Gafni, as reported by the Forward:

“Loyalty and the presumption of innocence are important values to me, so I will not join those who are condemning him,” Mackey said. “I am, at once, presuming Marc’s innocence and firmly standing against what he’s accused of.”

In November, soon after news of Donald Trump's vulgar brag of sexual assault made headlines, Gafni tweeted, "Donald Trump is an Outrageous Lover."

In December 2016, 130 advocates, including leaders from Faculty Against Rape (FAR) and the National Alliance to End Sexual Violence (NAESV), signed an open letter to board members of Whole Foods And Conscious Capitalism, urging Mackey to disavow Gafni.

“John Mackey, Whole Foods Market and Conscious Capitalism boards of directors have an opportunity to reach millions with an important message. Instead of maintaining the societal norm of silence around these issues, I would like to see them take a stand against child sexual abuse publicly — take a leadership role. Mackey should disavow Marc Gafni."

“Mackey’s fellow board members of Whole Foods and Conscious Capitalism have a legal duty of care to act in and protect the best interests of their organizations. They need to ask how Mackey’s association with Gafni may affect the reputation of the entities.”

Gafni has never been charged with a crime. Protest co-organizers the Stop Abuse Campaign and PAC Protect NY Kids are lobbying New York Governor Andrew Cuomo and lawmakers to pass the Child Victims Act. The proposed legislation would eliminate statutes of limitations for claims of child sexual abuse in New York state, where Gafni's accusers allege they were abused.

The New York advocacy groups have authored a petition to state lawmakers, pushing for the bill's enactment, garnering more than 69,000 signatures.

"New York state's statute of limitations laws, some of the strictest in the nation, protect sexual predators and not the children they prey on. Victims and survivors of child sexual abuse continue to be silenced by New York's laws. The Child Victims Act allows survivors to hold their abusers responsible and protect today's children. Whole Foods CEO Mackey's statement of loyalty to Gafni, who is protected by statutes of limitations, perpetuates the culture of enabling. Mackey should disavow his friend."

Scheduled speakers at the protest include Nikki DuBose, a former model turned author and advocate, and board member of Peaceful Hearts Foundation. She said:

"I will always defend children. Adults can make the decision to fight the fight with me, or become like the abusers themselves when they don't stand up for what's right."

"The content in this announcement may bring up feelings or memories for survivors of sexual violence. If you'd like to speak confidentially with a certified crisis counselor, call the Bay Area Women Against Rape (BAWAR) 24-hour hotline at 510-845-7273."