Jackpot Rising and PLAYlive Nation Join Forces to Deliver the Ultimate eSports Tournament Experience in Venues Across the U.S. 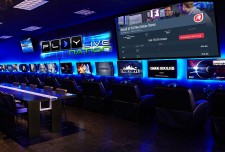 In February, the opening weekend for Overwatch League’s 2nd season showcased 20 professional teams as they began their journey battling it out for $5 million in the usual round-robin bracket format, with over 13 million viewers tuning in to watch the action. To put that in perspective, the 2018 MLB World Series averaged 14 million viewers. Now, imagine if all 13 million Overwatch League fans, most of whom play the game themselves, could all compete in the tournament as well?

Jackpot Rising has developed a tournament solution with processes that eliminate all of the friction, heavy lifting and limitations that have historically bottlenecked the potential of tournament participation. For example, it would be nearly impossible to organize, coordinate and operate a bracket tournament with 2 million players.

Jackpot’s streamlined tournament solution, on the other hand, allows for tournaments to have unlimited scale delivering entirely new player experiences with tournament formats open to everyone, such as elastic leaderboards, for any size player base. Players from all over and of all skill levels will now be able to seamlessly compete in video game tournaments for prizes – including real money – without the dependency of having to link up head-to-head with a competitor or work their way through a rigidly scheduled bracket, to name a few hurdles, each time they want to compete.

Duncan Wood, CEO of PLAYlive, stated, “PLAYlive Nation is excited to have this partnership with Jackpot Rising. Their technology is groundbreaking and will become an enjoyable part of our customers’ experience at our locations. We look forward to seeing Jackpot Rising grow and become a larger part of what we offer.”

PLAYlive Nation, an established entertainment venue company with over 50 premium game lounges throughout the United States, brings players together to be a part of the exploding gaming community. PLAYlive enhances the gamer experience by providing an intimate setting with an electric backdrop complete with numerous in-house consoles/PC’s and walls filled with flat screens.

Jackpot Rising will further intensify that experience by incorporating its patented tournament engine and unique, open structure into the mix. This combination will allow any player to go to the nearest PLAYlive location to battle others across the nation for top “in-the-money” spots in PLAYlive’s daily, weekly and featured tournaments powered by Jackpot.

Gamers who are at least 13 years old and located in approved jurisdictions, which includes more than half of the US, will be able to use their skills to compete against others for real money and prizes – kind of like the professional streamers they follow.

“The Jackpot Rising team is thrilled to partner with PLAYlive – they have created a fantastic environment and atmosphere for their premium gaming lounges across the country,” stated William Webb, CEO and Founder of Jackpot Rising. “We believe the partnership is a perfect fit for both parties and will provide exciting competitive gaming experiences that set a new standard.”

This partnership will initially kick-off with a series of tournaments for a handful of the world’s most popular games and ramp up from there. Players that enter a tournament will play matches that will be automatically reported, scored and ranked based off their Kills, XP points, and overall placement in each match. Most tournaments are structured by summing the scores of each entrant's best 3 matches played during the contest period and ranking their performance on the live leaderboard.

As PLAYlive continues its nationwide growth, Jackpot Rising's market timing couldn't be better in the rapidly evolving world of eSports. The partnership looks forward to integrating new gaming titles to ramp up the new seamless tournament format. PLAYlive is planning to launch their “Kickoff” tournament on July 23, 2019.

Jackpot Rising’s patented infrastructure powers social competition at scale, enabling an unlimited number of players to compete against each other for real money, prizes, digital goods, and other rewards in a wide variety of games. The platform is omni-channel, making Jackpot Rising one of the only companies in the world with the ability to power a massive, competitive tournaments and esports across a wide variety of gaming verticals, including Mobile, PC, Console, and Arcade. Jackpot’s solution creates an exciting and thrilling player experience where “It pays to be a winner.” The Company works directly with game developers, studios, entertainment venues, brands, and others to deliver new-age gaming entertainment both online and in venues.

PLAYlive Nation is a premium social gaming lounge focused on uniting like-minded players of all ages and to creating strong community-based relationships. Whether you have just a few minutes to play or you have the entire day, our environment and local players will be a great source of entertainment no matter how long you have to play. Some of the key features they offer include:

- Newest games available for play
- Gets gamers out of the house and meeting new people
- Clean, fun, and cool atmosphere
- Compete against others in real life for notoriety
- Events held regularly such as tournaments, leagues, & more Gaming-related merchandise

You can learn more about PLAYlive Nation: https://playlivenation.com

Jackpot Rising is bringing real money entertainment to the new age via its patented tournament platform that enables players to play games and compete against each other in real-money jackpot tournaments driving engaging, social competition.