The Israel Tennis Center's 40th anniversary exhibition tour continues with a robust series of special events scheduled for June in several major markets in the Northeast as well as Chicago and Toronto. 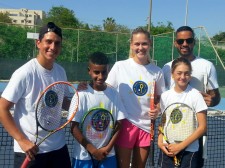 New York, New York, May 18, 2016 (Newswire.com) - “The ITC has been like a second home to hundreds of thousands of Israeli children of all backgrounds,” explained ITC Board President Phil Silber. “Having a group of these young people visiting the US and meeting our donors during our 40th anniversary is an extraordinary opportunity for our donors to learn first-hand what it means to these kids to live in Israel and get the kind of help our centers provide.”

Since 1976, the Israel Tennis Centers has been empowering Israel’s children to realize their full potential as productive and vital members of Israeli society. Now the largest social service agency for children in the country, the ITC continues to be a source of help for children with a wide range of needs, including those considered at risk, those with special needs, immigrants from Ethiopia and Russia and Arab and Jewish children brought together through its highly successful Coexistence Program.

Celebratory events have already taken place in Israel and the Diaspora, with many more scheduled for the balance of the year. Most immediate among them are the following scheduled for the US and Canada in June:

A diverse group of children and their coach from ITC centers in Israel will be visiting these communities to meet donors and share their incredible stories of learning and growth. They include 12 year old Daniella, who along with her father escaped persecution in Ukraine to settle in Israel and start a new life. They also include Alona, 19 years old from Haifa, who is currently serving in the Israeli Navy and is part of its special athletic program that allows aspiring athletes to play and train while finishing their military obligation. Perhaps most extraordinary is their coach, Badia, a Christian Arab from an underserved community in northern Israel, whose remarkable achievements leading our Israeli team is a shining example of ITC’s Coexistence Program, promoting understanding and respect among children of all religious and socioeconomic backgrounds.

About the Israel Tennis Centers Foundation:

For 40 years the Israel Tennis Centers Foundation (ITC), a 501 (c) 3 not-for-profit organization, has  worked tirelessly through the medium of sport to enhance the development of Israeli youth. Since opening its first center in Ramat Hasharon in 1976, the ITC has helped over a half million children, many of whom come from outlying and underserved towns throughout Israel. The ITC’s 14 centers stretch from Kiryat Shmona on the Lebanese border in the North to Beer Sheva bordering the Negev Desert in the South. http://www.israeltenniscenters.org.