Coming off an historic series of fundraising exhibitions this past February and March, the Israel Tennis Centers Foundation announced a fresh set of events for the month of June in three East Coast states: New York, New Jersey and Pennsylvania. 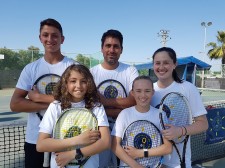 New York, NY, May 3, 2017 (Newswire.com) - Coming off an historic series of fundraising exhibitions this past February and March in New York and Florida, the Israel Tennis Centers Foundation announced a fresh set of events for the month of June in three East Coast states: New York, New Jersey and Pennsylvania. 2017 marks the start of the organization’s next 40 years, and if the February/March results are any indication, this will be a banner year for the ITC and the children of Israel.

“We were so grateful and inspired by the reception we received in New York and Florida earlier this year. It continues to validate the impact that the ITC has had on more than a half million children these last 40 years,” said Executive Vice President of Global Operations Jacqueline Glodstein. “Empowering Israel’s children for life is such a strong and important mission, and we are proud of how we have prepared children from disadvantaged backgrounds to have successful futures.”

The upcoming June events are scheduled for the following four markets:

A diverse team of Israeli players and coaches representing various Israel Tennis Centers will share their deeply personal stories about what the ITC has meant to them, their families and the communities in which they live. They will also participate in a high-energy tennis exhibition.

The focus of the ITC is on changing children’s lives every day so they can become better human beings. It offers a safe and nurturing environment in which ALL Israeli children, regardless of background, can learn vital life skills while sharpening their tennis abilities. Through its social impact programs, a wide range of children are served, including youth at risk, immigrants from Ethiopia and Russia and children with special needs, from autism and ADHD to Down Syndrome, as well as those with developmental and physical disabilities. The ITC also recognizes the ability of tennis to bring together children of different religions and ethnicities as seen in its highly successful Coexistence Program.

The players include Majd, a 10-year-old Arab boy who plays at the Ben B. and Joyce E. Eisenberg Israel Tennis Center in Jerusalem. He participates in the ITC’s Coexistence Program, playing alongside Jewish children while fostering better understanding and respect for one another. “I love coming to the center. We learn so many important lessons here, both on and off the court. We are all friends, and we don’t feel that there is any difference between us. Being at the ITC is like being part of a warm and loving family.”

About the Israel Tennis Centers Foundation:

For over 40 years, the Israel Tennis Centers Foundation (ITC), a 501 (c) 3 not-for-profit organization, has worked tirelessly through the medium of sport to enhance the development of Israeli youth. Since opening its first center in Ramat Hasharon in 1976, the ITC has helped over a half million children, many of whom come from outlying and underserved towns throughout Israel. The ITC’s 14 centers stretch from Kiryat Shmona on the Lebanese border in the North to Beer Sheva in the South. http://www.israeltenniscenters.org.