IESHIA, the fresh young female artist taking Oklahoma City by storm is dominating the air waves across Urban, Rhythmic, and Top 40 charts in the Top 200 National Billboard. She is the first recording artist in her genre to blaze three chart topping areas with not one song, but two in the Oklahoma City market. 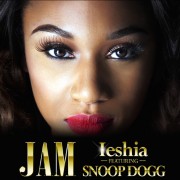 IESHIA, the fresh young female artist taking Oklahoma City by storm is dominating the air waves across Urban, Rhythmic, and Top 40 charts in the Top 200 National Billboard. She is the first recording artist in her genre to blaze three chart topping areas with not one song, but two in the Oklahoma City market. The local radio stations, concert promoters and businesses are taking great notice as door after door opens wide to receive the young thought provoking artist.

"I am determined to be a positive influence for young ladies everywhere. I have a standard regarding my lyrics, dress and attitude that I refuse to compromise. I can only imagine it helps but regardless, I will stand unwaveringly behind my beliefs."

“I can’t say how amazing it is to be received in such an overwhelming way. I never expected this response, I just work hard and do my best. I love it and I am so thankful,” says IESHIA, referencing her humble beginnings. “In the beginning, we were just working hard to serve a cause that was bigger than us in the best way we knew how. Music has always been a big part of who I am and it motivates me… so of course, I volunteered to sing for a great cause.”

What started as an idea to help her family serve the homeless population blossomed into a plan and purpose for IESHIA. “I want to create a safe haven for people transitioning out of homeless shelters. I want each person to be able to move into an apartment they can call home as they gradually move back into a place of self-sufficiency. My dream is to create a 60-apartment complex that will serve the recently restored population in Oklahoma City and I know it’s possible,” says they young artist.

IESHIA isn’t the normal artist you find looking to make it rich and get famous,” her father and manager, Anthony Thomas says. “In fact, she isn’t a normal young adult either. She is completely self-less and I think that is why so many entities gravitate to her. She is very humble and very intelligent. I know that even if I am not around, she is going to make the right choice… the moral choice, and that is a great feeling to have.”

IESHIA has a chart-topping collaborative work with none other than Snoop Dogg entitled ‘JAM’ that is gaining momentum. Downloads of the song from iTunes and Google Play will help build the apartment complex she is dreaming for.

“I am determined to be a positive influence for young ladies everywhere. I have a standard regarding my lyrics, dress and attitude that I refuse to compromise. I can only imagine it helps but regardless, I will stand unwaveringly behind my beliefs” IESHIA says firmly.

In a media market where “Trap” Music is growing in popularity and R & B is a dying genre, IESHIA’s fresh style and unique approach makes her shine like a diamond in the rough. With endorsements from some of the industry’s top DJ’s including, DJ Carisma, who named IESHIA “California Pick of the Week” and national spin play she is receiving from the BakaBoyz, professionals like Mack McKinney (who has produced hits for the likes of Ne-Yo and other top artists) are happy to work with the young artist. Even Kevin Lewis, President of VirdiKO is servicing her record to DJ’s across the US.

Tony Neal of “Core DJ’s” allowed IESHIA to perform both of her hits ‘JAM’ and ‘Drop It Down’ at CORE 24 in Atlanta this summer. After her performance, Tony excitedly approached IESHIA and told her that her performance was more than he expected, that he was blown away and advised her to continue to keep performing and writing music. He further stated that in 1992 he met a young lady that performed in Detroit who after her performance was down on herself and disappointed. But he insisted that she should not be and to keep striving. He assured her she would go very far. 8 years later the young lady died in a plane crash. He only told two women they were amazing after a performance, the first was the young lady in the crash, Aaliyah and the other was IESHIA. He then stated that IESHIA reminded him greatly of Aaliyah.

“At the beginning and end of the day, I am a philanthropist. It is what wakes me up and puts me to sleep. I grew up in a household that embraces love for all people. My parents have always imparted love without judgement and I want to continue the legacy they started in a much bigger way. My career is about more than an image or success, it is about giving back and loving others. At the beginning and end of each day, it’s all I care about” says IESHIA.

Her talent is just as amazing as her attitude because she is the number one sought out opening act for trending performances in Oklahoma City. Her career has allowed her to open for great artists like T-Pain, Kid Ink, Omarion and more across the country and serve as great testimonies of her work ethic, stage performance and commanding voice.

IESHIA is currently performing in public schools across the state helping to celebrate the return of the school year and hopes to do so across the nation. It looks as though she may very well get that chance and soon as a large local non-profit with a brand new app for teens considers making her the face of their promotional campaign. The app focuses on the angle of teens helping teens fight the plight of teen homelessness and the everyday problems they face finding food, shelter, medical care and more.

Local businesses have taken notice as well. Many are looking to IESHIA to provide endorsements, model products and perform at their events.  It is an exciting time of exponential growth and opportunity for the young pop artist.

IESHIA would like to extend a heartfelt thank you to the DJ’s  and radio stations across the nation playing her music and her fans who continue to request it. If you haven’t had the opportunity to request it please reach out to your radio station and request IESHIA’s ‘JAM’ or ‘Drop It Down’.

About Moore Marketing and Communications

Moore Marketing and Communications: We help our clients build brands with excellence.

Leadership and Etiquette Clinique to Honor Atlanta's Successful Women of Demonstrative Grace
'She's a BOSSE: Leadership & Etiquette Cliniques' is excited to announce the organization will hold its first Atlanta conference for teenage girls at the Grand Hyatt in Buckhead August 1st - 4th. Young ladies will learn: how to be graceful in attitude and dress; proper grammar and nonverbal communication; the importance of education, entrepreneurship and economics; and formal dining etiquette. daily with a final grand prize of a Toshiba laptop to be awarded on August 4th.
Moore Marketing and Communications - Jul 27, 2016

Prestigious University of Wisconsin Award Given to Congressional Advisor and Founder of PowerWoman Enterprise After Serious Bout With Cancer
Congressional advisor, attorney, business owner and cancer survivor are all proud achievements Milwaukee native Tonya Sloans has attained. She is now allowed to add, "Forward Under 40" Award Recipient to that list of honors.
Moore Marketing and Communications - Apr 12, 2016

15-Year Old Creator of Honestly Margo Featured at AmericasMart Atlanta Gift Show
Young entrepreneur and excellent business leader, Margo Gianos wows exhibitors at the AmericasMart Atlanta Gift Show with all-natural lip and body balm. The products are currently being sold in more than 140 boutiques all over the nation. Margo started the company at the age of 12.
Moore Marketing and Communications - Jan 10, 2016
Newswire